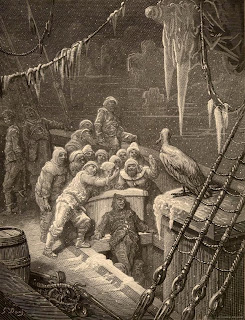 This won't get any attention (nor does it really deserve it, except from me) but buried in the majority opinion of the Supreme Court in Women's Whole Health v. Hellerstadt is a rather arcane legal discussion.  The issue is whether claimants were barred from making a facial challenge to the admitting-privileges requirement of the Texas statute on the grounds of res judicata.  Yes that's one of those "technicalities" you hear about now and again, but while it's important (it's the first issue the opinion addresses in the legal discussion of the ruling), it's still arcane.  Still, this little gem proves the Justices read the newspapers:

We find this approach persuasive. Imagine a group of prisoners who claim that they are being forced to drink contaminated water. These prisoners file suit against the facility where they are incarcerated. If at first their suit is dismissed because a court does not believe that the harm would be severe enough to be unconstitutional, it would make no sense to prevent the same prisoners from bring- ing a later suit if time and experience eventually showed that prisoners were dying from contaminated water. Such circumstances would give rise to a new claim that the prisoners’ treatment violates the Constitution.

Prisoners being force to drink contaminated water; wherever would they get that idea?

And as a bonus, Notorious RBG preemptively tells Ken Paxton ("HB2 was an effort to improve minimum safety standards and ensure capable care for Texas women. It’s exceedingly unfortunate that the court has taken the ability to protect women’s health out of the hands of Texas citizens and their duly-elected representatives") to stuff it, but as usual, he doesn't get the memo:

The Texas law called H. B. 2 inevitably will reduce the number of clinics and doctors allowed to provide abortion services. Texas argues that H. B. 2’s restrictions are constitutional because they protect the health of women who experience complications from abortions. In truth, “complications from an abortion are both rare and rarely dangerous.” Planned Parenthood of Wis., Inc. v. Schimel, 806 F. 3d 908, 912 (CA7 2015). See Brief for American College of Obstetricians and Gynecologists et al. as Amici Curiae 6–10 (collecting studies and concluding “[a]bortion is one of the safest medical procedures performed in the United States”); Brief for Social Science Researchers as Amici Curiae 5–9 (compiling studies that show “[c]omplication rates from abortion are very low”). Many medical procedures, including childbirth, are far more dangerous to patients, yet are not subject to ambulatory- surgical-center or hospital admitting-privileges requirements. See ante, at 31; Planned Parenthood of Wis., 806 F. 3d, at 921–922. See also Brief for Social Science Re- searchers 9–11 (comparing statistics on risks for abortion with tonsillectomy, colonoscopy, and in-office dental surgery); Brief for American Civil Liberties Union et al. as Amici Curiae 7 (all District Courts to consider admitting privileges requirements found abortion “is at least as safe as other medical procedures routinely performed in outpatient settings”). Given those realities, it is beyond rational belief that H. B. 2 could genuinely protect the health of women, and certain that the law “would simply make it more difficult for them to obtain abortions.” Planned Parenthood of Wis., 806 F. 3d, at 910. When a State severely limits access to safe and legal procedures, women in desperate circumstances may resort to unlicensed rogue practitioners, faute de mieux, at great risk to their health and safety. See Brief for Ten Pennsylvania Abortion Care Providers as Amici Curiae 17–22. So long as this Court adheres to Roe v. Wade, 410 U. S. 113 (1973), and Planned Parenthood of Southeastern Pa. v. Casey, 505 U. S. 833 (1992), Targeted Regulation of Abortion Providers laws like H. B. 2 that “do little or nothing for health, but rather strew impediments to abortion,” Planned Parenthood of Wis., 806 F. 3d, at 921, cannot survive judicial inspection.