The Hidden Agenda of Hiding the Wound 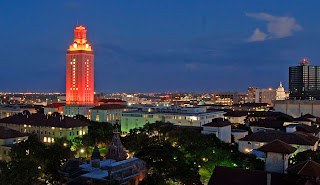 The hidden factor in the Fisher v. UT case is Texas public schools.

The state legislature passed a law, in an effort to avoid affirmative action counter-claims like Fishers, that required UT-Austin (part of the UT system, but the law does not apply to the system) and Texas A&M to accept the top 10% of Texas high school graduates.  Period.

This is a "color blind" system.

UT obtained a change in that rule.  Now it only has to automatically accept the top 7% of Texas high school graduates.  Why?  Because so many students from small school districts were coming to UT and flunking out.  They simply weren't prepared for the academic rigor of UT-Austin.  (And here's where the system gets interesting, because students who don't win automatic acceptance to UT can apply to a college in the UT system and, if they do well enough, can transfer to Austin after 1 year.)

The fact that the top 10% of high school graduates across the state cannot function at UT is an indictment of the Texas public school system.  But instead of noting that problem, we pay attention to whether or not white Amy Fisher was unfairly denied her "legacy."

The deeply hidden factor is the idea that tests like the SAT are "objective" and "unbiased" and establish a pure meritocracy where the fit prove their merit.  Or that all grades are equal, and thus all students equally compete on a level playing field when we only consider grades and test scores.  (I'm old enough to remember when you couldn't "prepare" for the SAT, because it didn't work that way.  Does anyone truly imagine middle-class whites don't have an advantage in preparing for the SAT that is denied to lower income students?  Does anyone anymore seriously think test scores are an objective and absolute measure of college merit, and is wholly colorblind and class-unconscious?  I've seen the "meritocracy" of wealthy white parents supporting their children's education, and "merit" is the least of its salient features.)

Which doesn't explain why UT is allowed, even under Alito's dissent, to consider other factors in admissions, as long as (per Alito) that factor is not race which excludes white students (Amanda Marcotte informs me that 47 students were admitted over Ms. Fisher, 42 of whom were white.  Ms. Fisher had no objection, and apparently neither did Justice Alito, to their admission.)

The hidden wound of racism remains hidden, because to look at it would indict us too deeply, and expose our complicity in the system too clearly.