Meanwhile, back at the loony bin.... 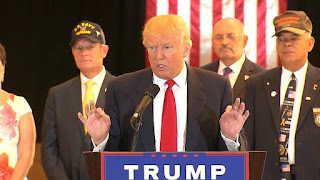 Trump skipped out on a January GOP debate in order to raise money for veterans’ charities but never announced how much the fundraiser took in or where the funds were going until The Washington Post published a story questioning his claims last week. The Associated Press reported that about half of the 41 organizations to which Trump’s campaign donated received checks in the past week, typically dated May 24, the day the Post’s story was published.


If I don't go after Donald Trump, it's because he makes it too easy.  Besides, he's an ass; who cares to prove that?

“I didn’t want the credit for it,” he said, adding moments later, “I’m not looking for credit.”

That was Donald Trump's explanation for why it took so long for him to actually make the donations he said he'd made.  This after he bragged, at the same press conference:

"I'm the only one in the world who can raise almost $6 million for the veterans, have uniform applause by the veterans groups, and end up being criticized by press."

But he doesn't want the credit; he just wants the credit.

"He's bragged for months about raising $6 million for veterans and donating a million dollars himself,” Clinton told CNN’s Jake Tapper. “But it took a reporter to shame him into actually making his contribution and getting the money to veterans. So look, I'm glad he finally did but I don't know that he should get much credit for that.”

And she didn't even have to go on Twitter and try to get him to debate to land that one.

There are reasons not to worry too much about November.