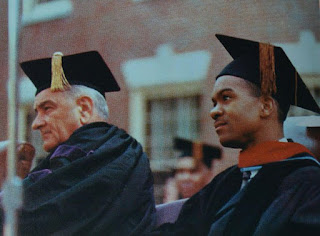 Our earth is the home of revolution. In every corner of every continent men charged with hope contend with ancient ways in the pursuit of justice. They reach for the newest of weapons to realize the oldest of dreams, that each may walk in freedom and pride, stretching his talents, enjoying the fruits of the earth.

Our enemies may occasionally seize the day of change, but it is the banner of our revolution they take. And our own future is linked to this process of swift and turbulent change in many lands in the world. But nothing in any country touches us more profoundly, and nothing is more freighted with meaning for our own destiny than the revolution of the Negro American.

In far too many ways American Negroes have been another nation: deprived of freedom, crippled by hatred, the doors of opportunity closed to hope.

In our time change has come to this Nation, too. The American Negro, acting with impressive restraint, has peacefully protested and marched, entered the courtrooms and the seats of government, demanding a justice that has long been denied. The voice of the Negro was the call to action. But it is a tribute to America that, once aroused, the courts and the Congress, the President and most of the people, have been the allies of progress.

Thus we have seen the high court of the country declare that discrimination based on race was repugnant to the Constitution, and therefore void. We have seen in 1957, and 1960, and again in 1964, the first civil rights legislation in this Nation in almost an entire century.

As majority leader of the United States Senate, I helped to guide two of these bills through the Senate. And, as your President, I was proud to sign the third. And now very soon we will have the fourth--a new law guaranteeing every American the right to vote.

No act of my entire administration will give me greater satisfaction than the day when my signature makes this bill, too, the law of this land.

The voting rights bill will be the latest, and among the most important, in a long series of victories. But this victory--as Winston Churchill said of another triumph for freedom--"is not the end. It is not even the beginning of the end. But it is, perhaps, the end of the beginning."

That beginning is freedom; and the barriers to that freedom are tumbling down. Freedom is the right to share, share fully and equally, in American society--to vote, to hold a job, to enter a public place, to go to school. It is the right to be treated in every part of our national life as a person equal in dignity and promise to all others.

But freedom is not enough. You do not wipe away the scars of centuries by saying: Now you are free to go where you want, and do as you desire, and choose the leaders you please.

You do not take a person who, for years, has been hobbled by chains and liberate him, bring him up to the starting line of a race and then say, "you are free to compete with all the others," and still justly believe that you have been completely fair.

Thus it is not enough just to open the gates of opportunity. All our citizens must have the ability to walk through those gates.


That's only part of LBJ's commencement address at Howard University in 1965.  But contrast it with what I can find of Justice Alito's dissent in Fisher v. UT.

"When UT decided to adopt its race-conscious plan, it had every reason to know that its plan would have to satisfy strict scrutiny and that this meant that it would be its burden to show that the plan was narrowly tailored to serve compelling interests," Alito wrote. "UT has failed to make that showing. By all rights, judgment should be entered in favor of petitioner."

He said that the university was engaging in stereotypes by arguing that the top 10 percent plan was not enough to ensure the diversity it sought in its student body.

He said the university had failed to define "with any clarity" its interest in ensuring a racially diverse student body and had also not demonstrated how its current program achieved that goal.

He said the goals the university had articulated "are not concrete or precise" and that they offer "no limiting principle for the use of racial preferences."

"For instance, how will a court ever be able to determine whether stereotypes have been adequately destroyed? Or whether cross-racial understanding has been adequately achieved?" Alito said.

He accused the school of paying "little attention to anything other than the number of minority students on its campus and in its classrooms" in its effort to increase diversity. He also said that courts had ignored the effect the program had on Asian-American students and had allowed the University of Texas-Austin to "pick and choose which racial and ethnic groups it would like to favor."

Alito said the school depended on "few crude, overly simplistic racial and ethnic categories," and that it had designed an offering of courses that "ensures a lack of classroom diversity."


The problem with racism in America is that white people created it, employed it, built a country on it, wrote our laws to enshrine it, and now we have to repudiate it.  But we can't do that by, as President Johnson said, bringing people who are just released from their chains to the starting line of the race and saying "Now you, too, can compete."  We can't do that by saying:  "You're free."  That freedom is truly barely 50 years old, and already the Supreme Court has declared what Charlie Pierce calls the "year of Jubilee."  And how is the gutting of the Voting Rights Act, which was meant to implement , almost a century after it's passage, the 15th Amendment, working out?  We built racism into this country's culture over 400 years; we can't eliminate it with a statute or a Constitutional amendment, because we are clearly determined not to.

To argue that we can eliminate racism by not doing anything to affect white privilege  is hardly "equal justice under the law."  Alito's argument is the redoubt of white privilege:  if we cannot be sure we are "color-blind," then we cannot be sure we aren't harming whites, like Ms. Fisher.  Notice that UT's policy does consider race as one factor among many; but to Justice Alito, that factor outweighs all others when it involves a white person.  "Cross-racial understanding," for example, is a lovely idea; but in this dissent it clearly means "When the non-whites understand the whites."  Ms. Fisher's position was that she was harmed because she is white.  Perhaps it is unfair to her, individually, to bear some of the burden of race in American history; but how much fairer is it to push that burden back onto non-whites, and insist that "strict scrutiny" requires we not scrutinize our past, the historical injustice of racism.  As President Johnson put it:  "We seek not just legal equity but human ability, not just equality as a right and a theory but equality as a fact and equality as a result."

It is the result that Ms. Fisher and Justice Alito object to.