It's not easy having no green 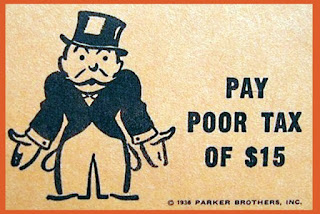 This raises a relevant question:

Could Sanders have raised $1 billion for a national campaign?  Because the upshot of this is clear:  a President without a Congress is a weak power, indeed.

Haven't we learned that in the last 6 years?

If Trump can't raise the money, he can't bring the party into office with him.  Maybe redistricting saves the House, but it might be tilted so far that the Freedom Caucus can no longer wag the dog.  And money buys loyalty:  if you didn't help me win office, why should I work with you?

That's pretty much the attitude of Bernie Sanders, it seems:  he deserved to win because people, for once in his 74 years, were paying attention to him on a national scale.  Not unlike the Tea Party crowd, he is convinced that once everyone hears him, they will understand; and those who don't (like the South, in the primaries) are simply anathema and discarded.

Imagine the support Hillary Clinton would garner with that attitude.

The entire primary process of the Democrats has been attacked because Hillary had so many super delegates before the primaries began.  To the victor goes the spoils, however, and Hillary has been a victor with many people in the Democratic party, and with many donors.  Trump, as JMM notes, doesn't have as good a relationship with donors, and thinks he doesn't need it.  But he doesn't understand:  he's going to be the leader of the GOP, because he's going to stand atop a ticket that wants to win in D.C. and in Paducah; it wants to win the Congress as well as the White House.  And Trump simply can't do that without money.

And how would Bernie do it?  And who in Congress would listen to him if he could win without all that money?  Because it wouldn't be for him, but it would certainly buy him a lot of friends.  Which, yes, is supposed to be distasteful; but weregild is an old concept, and Bernie isn't running for pastoral office.

And money is the mother's milk of politics, whether you like it or not.  Even pastors, after all, expect to get paid.

ADDING:  NPR tells me voter registration was up in California, but voter turnout didn't rise accordingly.  Sanders was counting the registrations as votes, but last I heard, he was down to $6 million going into the final primaries.  That kind of money won't buy a lot of GOTV effort in a state as populous as California, especially in the urban areas, which Sanders lost.  So, yeah, that $1 billion number buys support for down ballot candidates; but it also buys the nuts and bolts you need to actually win on Election Day.  And in the final analysis, despite all his $27 contributions, Sanders couldn't come up with it.  How would he come up with it nationwide?