"They don't even know what we're talking about" 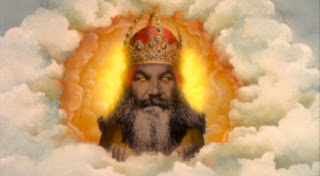 The irony is that Valerie Taricot didn't originate these ideas; they aren't even the product of her analysis of the Hebrew Scriptures.

Like bigotry, which has to be taught, she was taught this nonsense.  And it's a set of ideas with a very, very old pedigree.  It's very Christian, that pedigree, but its origin is in the separation of the Jews from the Christians.  You can see the beginning cracks of that separation in the Gospel of John, where the gospel continually makes distinguishing (and disparaging) remarks about "the Jews," separating them from the audience the gospel was intended for.

The analysis of the "God of the Old Testament" as war-like, intolerant, and bloodthirsty didn't limit itself to anti-semitism, but the roots of the distinction between "us" and "them" based on Jesus representing the "God of Love" and the Hebrew Scriptures presenting that "God of Vengeance" lies in that effort to distinguish the children of Abraham from Christians.

So it is, to this day, if applied to Jews, an anti-semitic argument.  You'll find it used by many virulently anti-semitic groups, if you dig beneath the surface just a bit; especially groups that base their anti-semitism on their Christianity.

Which means this reading of the Scriptures (which is barely a reading at all; Taricot makes sweeping generalizations, rather than specific references to Scriptures.  She doesn't even bother with taking things out of context, because she doesn't bother with context) is fundamentally racist.  Well, it would be if she applied it to Jews, rather than to Christians.

Then again, as Walt Brueggemann, scholar of the Hebrew Scriptures, said, "They don't even know what we're talking about."  Brueggemann's work is a fine example of the continuity between the Hebrew Scriptures and the Christian scriptures.  But Taricot just wants to trade in prejudice and bigotry, all in the name of being "enlightened."