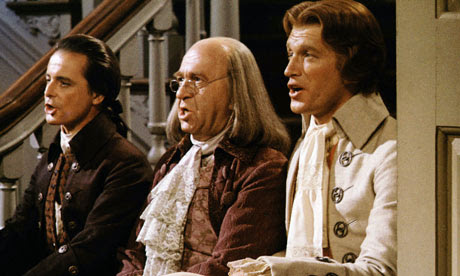 The idea of “self-evident” truths was one that drew less on John Locke, who was Jefferson's favored philosopher, than on the scientiﬁc determinism espoused by Isaac Newton and on the analytic empiricism of Franklin’s close friend David Hume. In what became known as “Hume's fork,” the great Scottish philosopher, along with Leibniz and others, had developed a theory that distinguished between synthetic truths that describe matters of fact (such as “London is bigger than Philadelphia”) and analytic truths that are self-evident by virtue of reason and deﬁnition (“The angles of a triangle equal 180 degrees”; “All bachelors are unmarried”). By using the word “sacred,” Jefferson had asserted, intentionally or not, that the principle in question—the equality of men and their endowment by their creator with inalienable rights—was an assertion of religion. Franklin's edit turned it instead into an assertion of rationality.*

Well, no; "Franklin's edit turned it instead into an assertion of [insularity]."  The "we" who hold these truths to be "self-evident" are set apart from the "they" who don't.  Strictly speaking it's exclusionary.  It may be an exclusion you think is sound and defensible because it is presumptively rational, but rational is not a one-size fits all model that places the subject so declared beyond purview.  It simply says "we" all agree on this and if you don't, you are NOK.  And so perhaps, as played out in the history of the country begun with those words, these truths don't apply to you.

Jefferson had it right the first time.  I wouldn't have said so if I didn't know the story of this edit, but Jefferson was right, and the elder man Franklin was wrong.

"Sacred and undeniable" are not synonyms for "self-evident," and "sacred" itself is not a religious or theological term that requires a confession, or even an assertion, of religious belief in order to be spoken.  I was listening to a story on "This American Life" about Teller of Penn & Teller creating a magic trick, a trick he only agreed to fully explain because, as it turned out, the explanation was part of the trick in the performance (Teller, on stage alone, manipulates a ball hung on a thread the audience can't see but is told is there.  The trick ends with Penn coming on stage with a large pair of scissors and cutting the thread, dropping the floating ball to the stage.).  How a magic trick works is sacred knowledge. The exception of this trick proves the rule Teller wouldn't reveal the secrets of other tricks and even Ira Glass, who performed magic for parties as a child, was careful never to reveal a magician's secrets.  Nothing about that is religious or pinned to religious belief, but that such knowledge is sacred and must be preserved, is beyond argument.

Which is what "sacred" means:  not a religious concept, but that something is "holy" (also not necessarily religious in content), set apart, to be preserved as it is against all change.  The trick Teller discussed worked because the audience knew how it was done, and still couldn't believe the explanation.  It worked because the secrets of all the other magic tricks in the show are held sacred.  If all magic tricks were explained, the entertainment of magic would be destroyed; it would change forever.  "Sacred" simple means protected against change; kept pure from adulteration (which is change); preserved as precious because it is so important.  As I originally commented at Thought Criminal, the love that creates a marriage is meant to be sacred, to not change over time, because it is a good that should be preserved against alteration.  So the truths Franklin thought should be self-evident are, to Jefferson, to be preserved against any diminishment.  Franklin is relying on Hume's fork, that the truths are as self-evident as an analytical statement; but, as Hume noted, such statements are worthless to human life, except as they create technologies for us.  What they don't do is provide us any information about the value of human existence, or the virtues of the truths the Declaration speaks of.

As for "undeniable," Jefferson puts these truths beyond argument, beyond cavil.  Reasoning, however, is never beyond argument:  just ask Socrates.  Tell him, like Euthyphro, that you know what "piety" is, and let the fun begin.  Socrates' discourse would fall on the opinion side of Hume's fork, but you are left no wiser for all that, and maybe even wonder if such a thing as piety is a truth, or not; or what truth would survive the acid of Socrates' irony.  Reasoning, as Hume did not understand, starts not with "truths that are self-evident by virtue of reason and deﬁnition," but with interpretation.  We interpret a scale, or even the evidence of our hands and arms, to determine if a stone is heavy, or if an object with angles equal to 180 degrees is a triangle, or if a triangle has angles equal to 180 degrees.  We even interpret what the idea of "degrees" means.  Reasoning begins, not with conclusion, but with interpretation.  This is why truth tables in logic don't reveal truth; they only reveal whether a structure of statements is properly organized, or not.  The conclusion of such a set of statements can prove only that the conclusion is sound; not that the statements are valid.  So:

Truth is a different matter from self-evident.  Hume understood that; he thought his "fork" made it self-evident that philosophy (the pursuit of wisdom) was a dead end.  He didn't think it led to any self-evident truths that were any good to anybody, much less to base a national philosophy on.  Yes, we call that "irony."

"Undeniable" is a different claim than "self-evident."  "Undeniable" places the subject beyond cavil, beyond purview, beyond argument, but for different reasons. It places it, in fact, beyond interpretation.  It may well be Franklin struck the word because he realized this, and because it was too radical even for a document that continues to be too radical today.  If it is undeniable that "all men are created equal," then the extension of the qualities of "man" (the normative figure) to other peoples (including slaves and Native Americans), and even to women, would be both undeniable and greatly accelerated.  Indeed, we interpret "self-evident" that way now, and invoke the spirit of these words, actually Jefferson's original words, to extend equality to women (still) and non-whites (still!), as well as those distinguished by sexual preference.  It has never been self-evident that they deserve equality as much as white males do, but it is becoming undeniable, and gets set in stone when it is finally deemed sacred.

*Taking this from a conversation started at Dohiyi Mir and continued at Thought Criminal.
Posted by Rmj at 7:27 AM