"Freedom's just another word for... 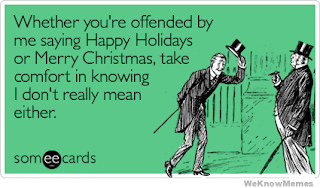 'War on Christmas Starts in July'!"


Trump began his speech by attacking the media and touting his election win, as he is known to do.

He went on to involved [sic] the memory of Benjamin Franklin and noted that at the Constitutional Convention, Franklin reminded his fellow delegates to “bow their head in prayer. I remind you, we’re going to start saying Merry Christmas again.”


Because nothing says "freedom" like a Presidential order to say "Merry Christmas!"  And you'd better mean it!

No, that's not the worst:

Reading from his speech [where Trump was to sign an executive order about the National Space Council], Trump had a poignant comment about “discovery” and a journey that “will not only make us stronger and more prosperous but will unite us behind grand ambitions and bring us all closer together.” But the moment was short-lived as Trump ad libbed, “Wouldn’t that be nice? Can you believe that space is going to do that?”

Trump then sat down at the table to sign the executive order. “I know what this is. Space!” he announced, enthusiastically.

[Astronaut Buzz] Aldrin again seemed uncomfortable. “To infinity and beyond!” he joked, and those at the event chuckled.

“At some point in the future, we’re going to look back and say how did we do it without space?” Trump asked, as if “space” was one of the scientists on the team.


Trump is an expert on space.  His head's full of it!

Thanks, I'll be here all week.  Sadly, so will Trump:

“My administration will always support and defend your religious liberty. As long as I am President, no one is going to stop you from practicing your faith or from preaching what is in your heart,” Trump continued.


Is anybody going to tell him?