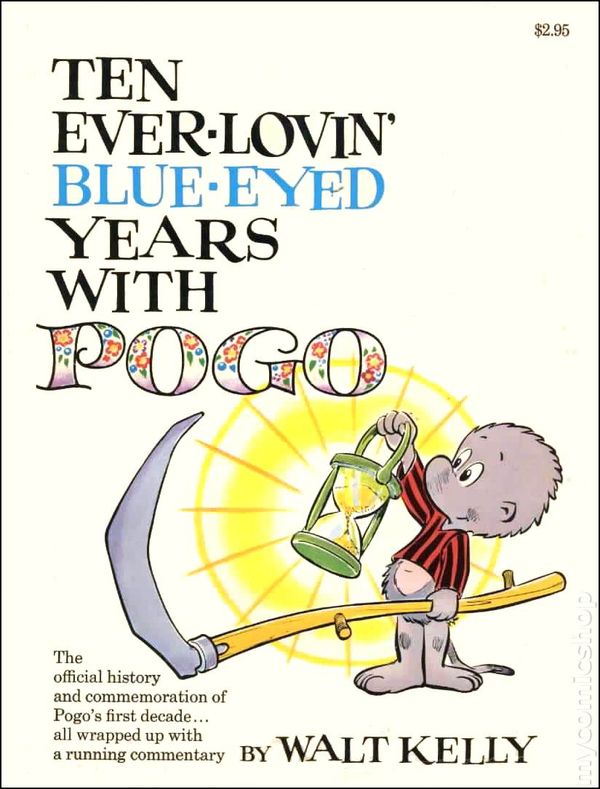 Anybody remember when you could buy a book that size for $2.95?
If you do, then you may be a Boomer!

Somewhere in Ten Ever-Lovin' Blue-eyed years with Pogo (as a review excerpted on the cover of my copy points out, the book doesn't have an index, so I'm not going to look it up; time is money!) among the "running commentary" Walt Kelly relates an encounter with a disgruntled voter on the day after an election.  The election was held sometime in the '40's, if I recall correctly, and Kelly and a friend are celebrating victory, but not the unhappy person they encounter.  Her side lost, and she expresses her disappointment vividly, ending with the phrase that keeps me remembering this anecdote:  "You bastards are bastards!", she says, referring not just to Kelly and his friend, but to all who share their politics, which are not hers.

I remember going for a walk with him [her father] the morning after the election.  He had allowed me to play hooky because the family had stayed up until the wee hours listening to the devastating statistics slowly mount up against Stevenson, and I had had no sleep.  We took the poodle for the usual walk on Riverside Drive, and he said to me sadly, "You poor girl, you've never lived under a Republican administration.  You don't know how terrible this is going to be."

The election of 1800 is now called "the birth of negative campaigning," which is true for America; but such vitriol dates back to the days of the Roman republic.  That election roiled with claims of identity based on religion (Jefferson would burn bibles!) as well as character ("hermaphroditical"?  The quality of our insults has been debased over time.)

So tell me again what political division is "arising" in America now?

In short, religious belief and practice are marks of identity in American society in the year of our Lord 2017. And as it happens, there is quite a bit of evidence emerging that American politics these days revolves around questions of identity, exacerbated by a growing urban-rural divide.

Marks of identity in the year of our Lord 2017?  Isn't this like claiming you've just discovered fire?  Invented the wheel?  Learned there is such a thing as "history"?

Well, no, that latter wouldn't do, would it?  As for that "growing urban-rural divide, never heard of the country mouse and the city mouse?  Doesn't that one date back to Aesop?  That "divide" prompted a whole genre of literature at least twice in American history (once for Mark Twain, a second time in the early 20th century (Spoon River Anthology; Winesburg, Ohio), then again in the '60's with everything from "Peyton Place" to "The Andy Griffith Show."  The literary list is really quite long.)

Honestly, these things that pass for knowledge I don't understand......