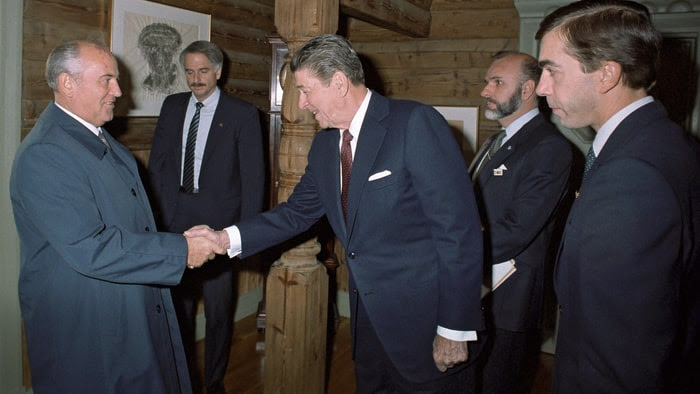 Well, not quite to the day:

The Russians are still klutzy at public relations, but this Gorbachev plays a shrewd game of poker — and he won big at Reykjavik. The Soviet leader kept upping the ante, offering real concessions toward arms reductions, and the president, surprised and unprepared, played along. Let's eliminate all of the medium-range nukes in Europe, Gorbachev suggested. Okay. How about a test-ban treaty? Sure, we can work it out. Let's both agree to dismantle half of our long-range nuclear missiles over the next ten years. Done, said the president. Then the Gipper got so carried away, he tried to top Gorby. Let's eliminate all of our nukes, he proposed. Why not? asked the smiling Russian.

Now Gorbachev showed his hole card — everything depended on Reagan sacrificing his dream of laser beams in space, the Strategic Defense Initiative, better known as Star Wars. It was a demand that shouldn't have surprised anyone, least of all the president; the Soviets have been insisting on an end to Star Wars for three years, ever since Reagan launched his space-defense program. But the president said no. He stumbled away from the table, looking very much the loser.

The highlighted line was the news that freaked everyone out, and that pushed Reagan's staff to be sure he was never alone again with anyone of consequence.  History repeats itself, the second time as farce:

Putin & I discussed forming an impenetrable Cyber Security unit so that election hacking, & many other negative things, will be guarded..
— Donald J. Trump (@realDonaldTrump) July 9, 2017

...have it. Fake News said 17 intel agencies when actually 4 (had to apologize). Why did Obama do NOTHING when he had info before election?
— Donald J. Trump (@realDonaldTrump) July 9, 2017


So, fake news; blame the Democrats and Obama; and agree to form a security group with the people accused by all 17 of your intelligence agencies with interfering in the last national election.  Oh, and Russia didn't interfere, but Obama knew they did and didn't react to it.

Sure; why not?  All Reagan wanted to do was eliminate all our nukes.  This is much more farcical....