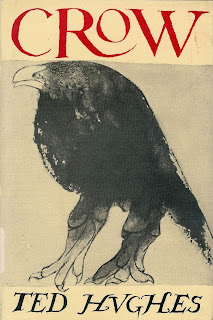 Who owns the whole rainy, stony earth?    Death.
Who owns all of space?    Death.

But who is stronger than Death?
Me, evidently.
Pass, Crow.

I posted this before with Eliot's "Marina," and reading that again I'm again convinced Hughes had that poem in mind when he wrote this one.  Not thematically, but certainly as an inspiration for how to use the language to his own purpose.

Besides, it's a worthy meditation for Lent.
Posted by Rmj at 6:07 AM