Now if he would just DO something radical* 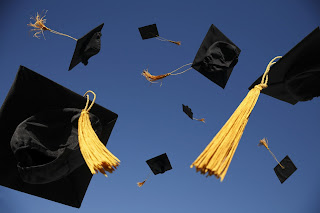 Ezra Klein on Ben Bernanke speaking to graduates at Princeton.

I don't want to add anything ponderous, except that talk is cheap.**  And point out it's the people at the top who generate, or better, pay someone to generate, the excuses for why they should be at the top, and why other people shouldn't.  Bernanke's description of the working class is:

“I think most of us would agree that people who have, say, little formal schooling but labor honestly and diligently to help feed, clothe, and educate their families are deserving of greater respect–and help, if necessary–than many people who are superficially more successful."

Which, of course, is the sheep and the goats issue from Matthew.  But Bernanke is Jewish, and he wouldn't raise such a Christian issue in a commencement speech, would he?  That would be radical, indeed.  But Mr. Bernaker does make some pertinent, if close to cliched, observations for the graduating class:

Does the fact that our lives are so influenced by chance and seemingly small decisions and actions mean that there is no point to planning, to striving? Not at all. Whatever life may have in store for you, each of you has a grand, lifelong project, and that is the development of yourself as a human being. Your family and friends and your time at Princeton have given you a good start. What will you do with it? Will you keep learning and thinking hard and critically about the most important questions? Will you become an emotionally stronger person, more generous, more loving, more ethical? Will you involve yourself actively and constructively in the world? Many things will happen in your lives, pleasant and not so pleasant, but, paraphrasing a Woodrow Wilson School adage from the time I was here, “Wherever you go, there you are.” If you are not happy with yourself, even the loftiest achievements won’t bring you much satisfaction.

And, yet, despite the fact Ezra leaves it out, he makes his point about ethics and merit and meritocracies, a sharp point indeed with a quote from the Gospel of Luke.  And here Mr. Bernanke both manages to treat that Gospel as the socially radical document it is, and to point out to his audience that they were born on third base; they didn't (yet) hit a triple:

A meritocracy is a system in which the people who are the luckiest in their health and genetic endowment; luckiest in terms of family support, encouragement, and, probably, income; luckiest in their educational and career opportunities; and luckiest in so many other ways difficult to enumerate–these are the folks who reap the largest rewards. The only way for even a putative meritocracy to hope to pass ethical muster, to be considered fair, is if those who are the luckiest in all of those respects also have the greatest responsibility to work hard, to contribute to the betterment of the world, and to share their luck with others. As the Gospel of Luke says (and I am sure my rabbi will forgive me for quoting the New Testament in a good cause): “From everyone to whom much has been given, much will be required; and from the one to whom much has been entrusted, even more will be demanded” (Luke 12:48, New Revised Standard Version Bible). Kind of grading on the curve, you might say.


A line I'm sure many could have sworn was in the Communist Manifesto; or at least Das Kapital.   And yes, it really sharpens his point, saying this to the graduating class of an elite and expensive university.  It also gets perilously close to the question of whether or not I am my brother's keeper; an idea that, in our politics at least, we seem more and more determined to answer in the negative.

I especially like the picture at Ezra's blog, showing Mr. Bernanke walking bareheaded behind a man in pseudo-British academic regalia (who can resist the urge to dress in costume?), carrying a scepter that is at once British and Romanesque, with its eagle surmounting the rich silver decorations of the black rods (fasces, if I remember my Latin correctly, from which Mussolini took the name of his party).  Symbols redolent, in other words, with the concept of power and where it flows from and who wields it (which is pretty much one and the same).  So maybe Mr. Bernanke was speaking truth to power, after all.


*Is the Fed the reason for the post-recession inequality in America?  Well, it's certainly not a reason there is no inequality in post-recession America, and the evidence assembled against the charge is pretty weak stuff, indeed.  What it hasn't been is a radical voice critiquing the American system as it exists.  And really, upon careful reflection of his words, neither is Chairman Bernanke.

**As Ezra point out:

if Bernanke is skeptical of the meritocracy and even more skeptical that the rich deserve their wealth, that might be because he’s watched his policies make the rich richer, despite all they did to cause the crisis, even as the folks with “little formal schooling but [who] labor honestly and diligently to help feed, clothe, and educate their families” have fallen further behind. It’s enough to make anyone a radical.

The "if" there is the tell.