When the political becomes the personal, it suddenly becomes very hard to continue to be "political":

Senators who voted against a bipartisan amendment expanding background checks for firearm purchased at gun shows and online refused this week to meet with families impacted by gun violence, citing scheduling conflicts or ignoring requests altogether.

Read the entire post; I don't want to quote it all here.  Clearly politicians are finding it awkward and uncomfortable to vote on abstract issues like "gun rights" and then face real people who suffer the real consequences of a nation awash in guns 'n' ammo.  "Big Ideas" meet human life, and once again, human life loses, and the only way to maintain the sanctity of the Big Idea is to keep human life away from it.

If I rail against ideas and knowledge for its own sake, this is a small part of the reason why.  We have fed to satiety on abstraction.  We have learned, begrudgingly, to not look upon others as members of a "race", and to attribute behaviors and characteristics to that "race" that then tar individuals.  We have learned, at least, to realize we really shouldn't do that, or cover it up with degrees, from "racism" to "prejudice" to simply "I just wouldn't want my daughter to marry one."

But we have not yet learned to place people above ideas; to do the hard work of discerning what is good for society, or just for others, rather than the easy work of serving the Big Idea.  There is a tension there, too, because without an Idea, even a Big Idea, society ceases to function.  But we've turned too hard toward the Idea, and too easily away from the person:  the grieving spouse, the parents of a dead child, the victims of too much violence too easily explained away or simply ignored (how many families from Chicago are traveling to Washington to beard Senators in their offices?  How many of those families would be listened to if they could make that journey?  How many Senators and Representatives are instead seeking them out, as servants of the public?)

Something's happening here; what it is, ain't exactly clear.  But persons are reaching out to persons, telling them not "Beware," but "Listen."  That the persons being addressed don't want to listen, illustrates just how compelling the message is.

Maybe a Big Idea is about to give way to reality.  A consummation devoutly to be wished. And no, the concept of public officials reaching out to the least among us is not a wild abstraction or a fond wish: 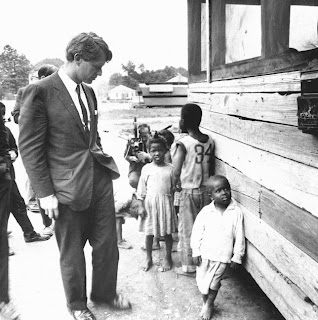 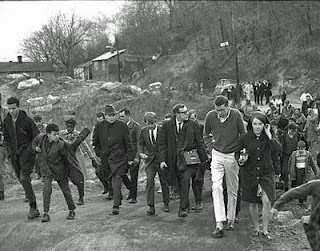