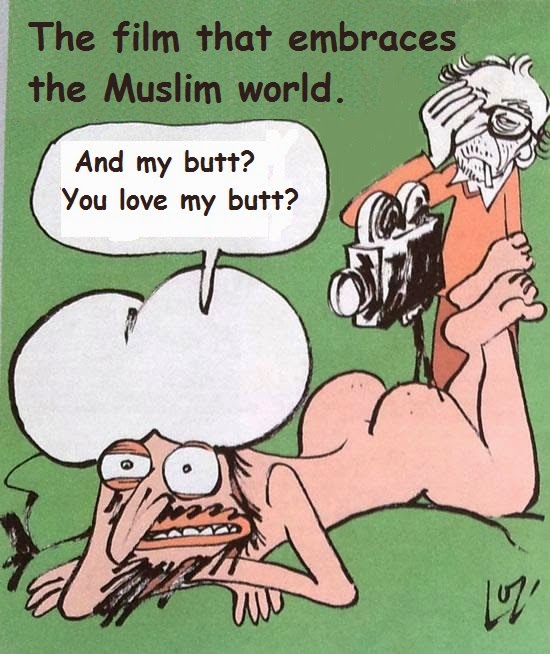 Sorry; but at some point, you gotta make your point.

Can we talk about "Charlie Hebdo" without invoking racism?

But their work featuring Mohammed could be sophomoric and racist. Not all of it; a cover image of the prophet about to be beheaded by a witless ISIS thug was trenchant commentary on how little Islamic radicalism has to do with the religion itself. But often, the cartoonists simply rendered Islam’s founder as a hook-nosed wretch straight out of Edward Said’s nightmares, seemingly for no purpose beyond antagonizing Muslims who, rightly or wrongly, believe that depicting Mohammed at all is blasphemous.

Now, if the drawing of a "hook-nosed wretch" is clearly meant to portray a Jew, no one would hesitate to call it racist, even "anti-semitic."  But a "Semite"  can be an Arab, so even the term is not really limited to the descendants of Abraham; except that we insist it is.  And why?  Mostly because of the Holocaust; which is a good reason; but it is not good reason enough to render all things Jewish as sacrosanct, while all things semitic but not Jewish are treated as "other."

I'm not convinced, by the way, that depictions of Mohammed are automatically blasphemous.  What truly seems to provoke acts of terrorism are not 19th century style depictions of Mohammed as an historical figure, but crude, cartoonish depictions meant to insult, deride, or provoke an outraged response.  So, when we speak of responses to portrayals of Islam in non-Islamic countries, are we talking about religion?  Or about cultural imperialism?

I often feel like someone trying to catch a slippery eel when following those debates. It slinks about, hides behind stones and water-weeds, dashes across some open water, the sun glints on it, I attack, and the eel is gone. Take the way the term "racism" is used here. It doesn't have its usual definition of applying to people who "look different" from one's own racial group (however that is determined). It applies to people who might or might not "look different" but who certainly have a different religion.

The term is incorrect. I'm not sure what the correct term is, but it's not racism, and calling it racism makes the analysis more difficult. Clearly people who "look different" can face the usual type of racism and it's also possible that the religion of those people will be labeled because the people are seen as "other."

It's hard to say the term is incorrect in light of comments like this:

"That's my question about these guys because if we know they were speaking unaccented French and they had, you know, ski masks on, do we even know what color they were," Bream said. "What the tone of their skin was. I mean what if they didn't look like typical bad guys?'

Or sweeping statements by people like Bill Maher that all religions "are stupid and dangerous."  What, really, is the difference between saying that, and saying that all members of a racial class (and what is the race of Jews, pray tell?  Do all Jews really "look different"?  From whom?) have characteristics which automatically make them both stupid and dangerous?  Is the reasoning behind that statement, or behind those of Richard Dawkins, really distinguishable from the reasoning behind white supremacist remarks?  Those kinds of sweeping generalizations are the very definition of racism, and it wasn't that long ago that some "white" Europeans were considered separate (and inferior) "races" from more "advanced" Europeans, namely the ones establishing the categories.  We can't really argue that racism is all about clear physiological differences without first establishing a wholly indefensible basis for those differences; and how that reasoning differs from Bill Maher's comments, or Richard Dawkins', is a mystery to me.

And so much of this discussion rests on misunderstanding and sheer lack of knowledge:

Or has, say, the specific history of Europe caused changes which now mean that Europeans are out of step with large chunks of the rest of this globe? What was the role of reformation in Christianity? What was the role of getting the church out of absolute power? When did literal interpretations of the Bible become the minority voice? And what is happening in that sense inside Islam? I'm also intrigued by the somewhat similar situation in the US. Is the slippery eel I'm trying to catch something that is similar in Islam and, say, right-wing US Christianity


The Reformation didn't remove Rome from imperial power; politics did that.  German princes defended and even housed Martin Luther, and gave him a base from which to form his own church. They did it in large measure for the same reasons Henry would do it slightly later in England:  to establish their political power.   Henry VIII took over the church in England for his own purposes, not because he was a reformer like Calvin, who ran Geneva, or Luther, who needed protection.  The church never had absolute power, either.  Look to Napoleon crowning himself; stories of emperors being forced to come to the Pope in the snow are singular, not plural.  Richelieu was an individual in France, not an institution in Europe.  If you want examples of absolute power, look to Calvin's Geneva, or Plymouth Plantation in America, or Salem when Massachusetts was still a colony; and even then, such power didn't last long.

Literal interpretation of scripture was always the minority voice, and it started pretty much in response to German Biblical scholarship.  Literalism is still not quite 100 years old; in a 2000 year history where major Christian denominations (Roman Catholic, branches of the Orthodox church) have never taken it up, it's rather blind knowledge of recent American history to imagine this voice has been marginalized rather than always been at the margins.  As for nationalism in Europe v. religious identification in Islamic countries, is it really that hard to understand the Enlightenment was a European event, not a universal one?  That the Jeffersonian "wall of separation" is a recent invention, and a Western one, and was not the norm for human civilization, Western or Eastern, for much of human history?

Can we really not understand that our experience and our culture is not normative, and that much of what we are seeing in Islam is, like fundamentalism in America, a reaction to modernism, not an evil aberration of "others" bent on our destruction?  If there is a justification behind the argument that we created the evil that now afflicts us, it is in the knowledge that we don't understand other cultures, and don't try to.  The colonialist attitude of the 19th century is alive and well in the 21st; Mark Twain would have no trouble recognizing what he condemned in American attitudes.  If anything, he would probably further despair at how little has changed since his lifetime.

I'm not even sure this advances the conversation all that much:

My theory is that the conditions are three (the first of them not being a condition at all but the usual state of things): First, you must have a holy book from several thousand years ago which describes the mores and rules of the society then. Second, you must have a rule (either real or self-determined) that the book is the literal word of a divine power and must be interpreted that way: literally, never changing, never referring to some local circumstances then. Third, your religion must be non-hierarchical enough so that no higher level of the faith pyramid can tell you what the correct interpretation of god's words should be.

The "holy book" of Jews and Christians describes mores and rules of the society then; on the other hand, so do Shakespeare's plays.  As the French say, the more things change, the more they remain the same.  Scripture may describe those things (what literary work doesn't?), but it doesn't necessarily prescribe them.  Even the most rabid literalists, for example, don't use Philemon to justify slavery today.  And in the same way that the Koran guides Islam, haditha informs interpretations of the Koran; it's an idea the Muslims got from Jewish midrash.  Christians, of course, have commentaries dating to the first century and continuing to the present day (pretty much what every sermon on Sunday morning is).

That the interpretation itself must be both literal and unchanging is, as I say, an idea still less than 100 years old.  It is true that religious fundamentalism is a product of very recent history; but that says more about recent history than about religious belief throughout history.  As for being non-hierarchical, here again we mistake the power of the papacy with absolute power over all Catholics.  The bishops in America don't like everything Pope Francis says; and while they don't publicly contradict the Bishop of Rome, like the police of New York city the bishops know how to slow walk his ideas.  And if the power of the Pope is so great, how does one explain Bill Donohue?  Almost no one agrees with his interpretation of God's words, except for Bill Donohue.  Despite Donohue's paltry influence, never doubt that there are Catholic fundamentalists at large in the world.

Fundamentalism is a subject for study, of that there is no doubt.  You can do it with nothing more than internet access.  It's a subject considered across several volumes, and ranges from Islam to Hinduism to Soviet Marxism (!). (Stephen Jay Gould even applied it to Dennett and Dawkins.)   It is, in short, complicated.

Most of the world is.  Regarding it from the perspective of the internet is something I've more and more come to consider a grand waste of time.

As well as a source of no little despair.