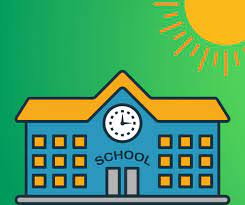 This will take a bit of unpacking.

The local school district conducts a student survey every year to get an idea of how well the district is serving the students.  (No judgment here.  I grew up in the era of "bubble tests," most of which weren't tests conducted by the teacher, but questions we had to answer by filling in "bubbles" on pieces of paper.  I thought then it was preparation for SAT's, because I saw no other pedagogical value to it.  I'm sure it was some kind of assessment (at one point apparently they did mass IQ tests.  I saw my scores on that.  One summer I worked with a janitorial crew cleaning and waxing the linoleum floors of the schools.  I found my permanent record in the teacher's lounge of my high school.), but what was being assessed was never all that clear.  So it was stuff like that.  It was new, it was sciency, it was "modern," and the school district took to it like a dog to water.  Same as it ever was.)

The local school district has been doing this for years, and accumulated a record of results that helps guide curriculum decisions and other decisions about how to adjust/improve the district and educate the students.

Let me pause here to note this kind of work is the work of the full-time administrative staff.  I mean that in contrast to the work of the volunteer (unpaid) school board.  The latter's job is to guide, and be guided by, the administration.  To approve budgets prepared by staff, to approve bond proposals prepared by staff, to publicly praise and recognize notable student achievements as presented by staff.

You get the picture.

So the district has been conducting the student survey for many years, using one vendor to administer the survey and report the results to the administration.  There are several companies that offer this service, and all offer a battery of questions the district can choose from to craft a survey responsive to their needs and interests.  Just like cars, these questions are all pretty much the same across the several companies.  What varies is the questions a district chooses for its survey. So you want a black car, I want a white car; you want a care with leather seats, I prefer fabric.  Again, you get the picture.

Now come three new board members who haven't been on the board a month, and they don't like these survey questions.  Have they seen them?  No.  Do they know exactly what questions the district asks?  No.  But the contract is up for renewal, and they say:  "No."  Why?  Because they don't like the questions.  Yes, we are going in circles.  Have they seen the questions?  Somewhere, it seems, they have.  Most likely on a Facebook page or somewhere on the intertoobs.  Are those questions actually ones available from the vendor?  Who knows?  Are any of them the questions used by the district now?  Who knows?  No one but the three members knows what they are objecting to.

A new survey cannot be conducted until next spring, at the earliest; that's if they will approve a new vendor (and probably they won't, because "they don't like the questions").  It will take about 2 years to build up enough of a data base to have useful responses to the surveys.  They will lose access to the data already accumulated (apparently it's proprietary). That's a lot of sunk cost.  That's a lot of value being tossed out the window on nothing more than a whim. This was explained to the board.  All of it.  Did the new members care?  No.  They know all they need to know, and knew it before they were sworn in.  Aux armes, les citoyens!

This is going to cost the district in sunk costs and lost information.  These actions are the opposite of the actions of trustees who have a duty to put the interests of the district above their own interests.  This is the Donald Trump school of governance:  I don't know anything, but that makes me more qualified than you.  And I'm in charge, and you're not, so:  fuck off.

And a bit of an interesting sidetone:  the district has been replacing old school buildings with new for some time now.  That involves architects and engineers and bond propsals and a whole raft of complexities which is the kind of thing that really keeps school boards busy with oversight (administrative staff handles all the details).  Now a new board member pulled a consent agenda item involving the construction of a new school that was to be done by the architects and engineers already approved for such work.  He wants to open the bidding process to public bids, again.

Why?  Well, his wife is an architect.  You draw the conclusion.    Ethically, he should recuse himself and not vote or discuss any such topics.  And perhaps he's an ethical person who simply doesn't understand he's now in a fishbowl.  If he's not careful, he's going to find out.  And that could damage the entire school district.

Like I said, the Donald Trump School of Governancing.

May you live in interesting times.