Living in a Comic Book World 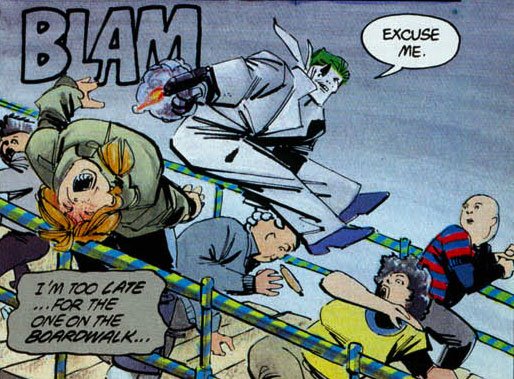 In Frank Miller's "reboot" of Batman (now so old it is practically canon), the Joker is a homicidal maniac who first blows up an apartment building by remote control, then gasses an entire TV studio audience to death, and finally passes out free cotton candy at a carnival:  poisoned cotton candy.  He then goes on a shooting rampage as he flees the arrival of Batman.

Each time, Batman asks himself how many more he will let die before he stops the Joker once and for all.  But, being Batman, he can't kill the Clown Prince of Crime, even in their final encounter.  Somehow the Joker manages to do it for him, ending the conflict between the two enemies where it should end, but without leaving blood on Batman's hands.*

I mention this because, this morning, that seems like a metaphor, a parable, for America and gun control.  We are too good and decent and American to control guns like they do in Europe (God forbid we should ever be like Europe!  Maybe after another 300 years we'll be ready to be as ecumenical about our origins as Protestants are now with Catholics.  Maybe.).  We can keep our guns and keep our innocence and keep our government off our backs (except when we want it to protect us from gunmen in high places, or natural disasters, or foreign enemies, or kneeling football players).  We can allow killers to have access to guns even as we prosecute those killers after the fact, or just kill them at the scene, and still allow ourselves to be awash in a sea of guns (NPR's Marketplace reported this morning the pre-market stocks of the two largest gun manufacturers was down on Friday, and surged by 7 points this morning, in anticipation of gun sales responding to the shooting and to any discussion of gun control, the latter of which is as likely to happen as it is likely Trump will apologize to someone in public).

We can't stop the Joker, not finally.  We can only ask ourselves how many more we will allow him to kill.  Thus do we maintain our sense of morality and justice.  Thus do we continue to live in a comic book world.

*doubly ironic because in an earlier encounter with kidnappers, Batman has no problem killing the last thug who is holding the kidnap victim hostage at gunpoint.

ADDING:  By the way:

As a fact check, there is a mass shooting nearly every day in the United States. Out of the 275 days that have passed so far in 2017, Sunday’s shooting at Mandalay Bay was one of 273 shootings in the country.