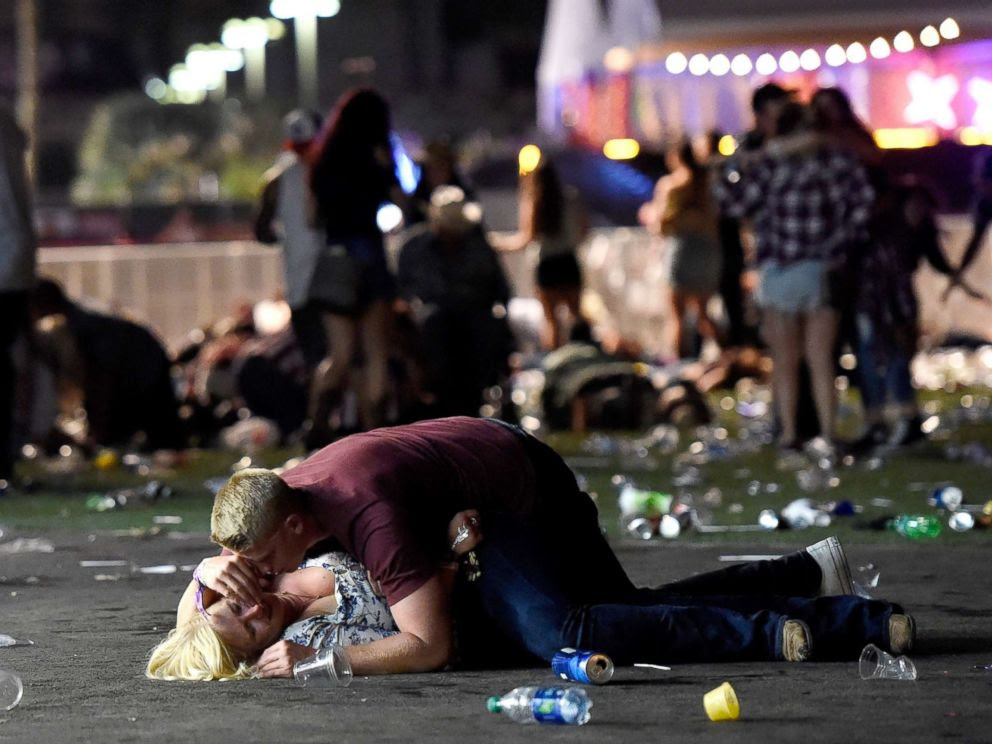 The horror of the shooting in Las Vegas can't overshadow the horror of conditions on Puerto Rico:

By Saturday, 11 days after Hurricane Maria crippled this impoverished U.S. territory, residents scrambled for all the staples of modern society – food, water, fuel, medicine, currency – in a grinding survival struggle that has gripped Puerto Ricans across social classes.

For days now, residents have awoken each morning to decide which lifeline they should pursue: gasoline at the few open stations, food and bottled water at the few grocery stores with fuel for generators, or scarce cash at the few operating banks or ATMs. The pursuit of just one of these essentials can consume an entire day – if the mission succeeds at all – as hordes of increasingly desperate residents wait in 12-hour lines.

The story that opens that article is about a grandson who drives 45 minutes to a Wal-Mart where 400 people stand in line hoping to get in. He's there to get blood thinner medications for his grandmother.  The generator fails and the store closes before he can get what he came for.  If Geraldo Rivera can't find anyone dying in Puerto Rico 11 days after the storm hit, he just needs to wait a bit longer.  According to the Pentagon:

A lot of those people are going to get sick, and some may die before they can be treated; or die regardless, but will they do so in front of Rivera so he can decide what caused it?

So what did Trump do yesterday, before extending "warmest condolences" to the families of shooting victims in Las Vegas?

“On behalf of all the people in Texas and all of the people of ― if you look today and you see what’s happening, how horrible it is, but we have it under really great control ― Puerto Rico, and the people of Florida who have suffered over this last short period of time with the hurricanes. I want to just remember them,” Trump said.

“And we’re going to dedicate this trophy to all of those people that went through so much that we love, a part of our great state, really a part of our great nation,” he added, before pivoting to talking about golf. “And I’ll tell you what ― I’ve been watching this thing from the beginning. And I have to say, our Team USA, wow, did you play well.”


With those words he awarded the President's Cup at a golf tournament.

These things will be driven out of the headlines, for a while.  No matter; our attention to them is not important; it's the President's attention that's important, and it seems clearer and clearer his attention is directed by cable news, not by briefings from his staff.

Trump has a different philosophy, however, and spent the post-storm Saturday glued to his television and letting the hosts of Fox & Friends drag him into an ill-advised Twitter spat with NFL stars.

The Washington Post reports that by Monday, Trump “was becoming frustrated by the coverage he was seeing on TV.”

If it ain't on cable TeeVee, it ain't real to Trump.

Perhaps at least we won't be treated to any more episodes like this:

Before the performance of "The Star-Spangled Banner" at today’s game between the Ravens and Steelers, the P.A. announcer at M&T Bank Stadium in Baltimore asked fans to join and “pray that we as a nation embrace kindness, unity, equality, and justice for all Americans.” When players knelt to observe the prayer, a cascade of boos rained down upon them from the stands.

We can allow people access to automatic weapons; we cannot allow people to kneel on football fields.  So much freedom, I'm getting sick of all the freedom.