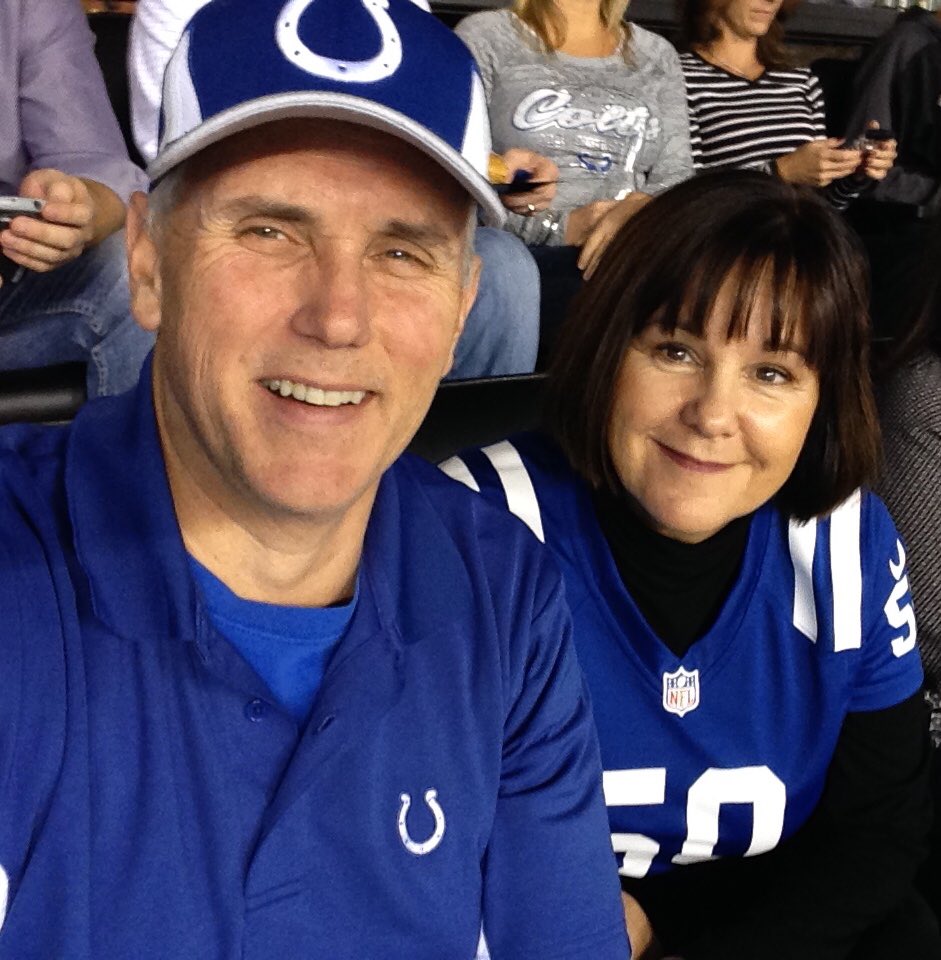 Mike Pence at a game in 2014, posting this picture as if it were today's game.
What premeditation?

What shouldn't be lost in the stupidity of VPOTUS Pence walking out of a football game before it starts is that the Vice-President is an separate Constitutional office from the Presidency.  He doesn't work for the President or serve at the President's pleasure.  And yet:


FLAG: Was Pence leaving Colts game a political stunt? Reporters were told to stay in van bc "there may be an early departure from the game."
— Peter Alexander (@PeterAlexander) October 8, 2017


Pence was in Las Vegas Saturday, and flew to Indianapolis Saturday night just to attend the football game.  He left to fly to Los Angeles for a fundraiser.  No doubt part of the pitch will be walking out of the football game in high dudgeon.*

Pence's office even had a statement ready to go:

I left today’s Colts game because President Trump and I will not dignify any event that disrespects our soldiers, our Flag, or our National Anthem. At a time when so many Americans are inspiring our nation with their courage, resolve, and resilience, now, more than ever, we should rally around our Flag and everything that unites us. While everyone is entitled to their own opinions, I don’t think it’s too much to ask NFL players to respect the Flag and our National Anthem. I stand with President Trump, I stand with our soldiers, and I will always stand for our Flag and our National Anthem.


Of course, Trump couldn't leave Pence in the spotlight:


I asked @VP Pence to leave stadium if any players kneeled, disrespecting our country. I am proud of him and @SecondLady Karen.
— Donald J. Trump (@realDonaldTrump) October 8, 2017

As Josh Marshall said, Trump had to prove Pence is the toady he so obviously is.

Which is why it's important to remember the Vice-President doesn't serve at the pleasure of the President.  Pence didn't have to do this.  He wanted to do it.  Marshall lays it all on Trump:

It reminds us what we already know. In Trumpland, everyone gets hurt. No one emerges with any dignity intact. He’s that ravening maw of ego and appetite and above all else unquenchable need and he has the country by the throat.


I don't let Pence off the hook that easily.  Hell, even the photos he tweeted about the game are fakes.  And Trump has us by the throat?  Only if we are all as spineless and worthless as Mike Pence.

*Vox notes this entire method of protest was dying down when Trump revived it with his first series of tweets, and was fading again when Pence walked out today.  No doubt it will be revived again, just so Trump has a straw man to punch.  That doesn't weaken the purpose of the protests, for me, but it certainly underlines what a non-controversy this actually is.  Doesn't Trump have a day job to keep him busy?