Keeping the Elephants Away

The Caravans are made up of some very tough fighters and people. Fought back hard and viciously against Mexico at Northern Border before breaking through. Mexican soldiers hurt, were unable, or unwilling to stop Caravan. Should stop them before they reach our Border, but won’t!
— Donald J. Trump (@realDonaldTrump) October 31, 2018


The northern border of Mexico is the Rio Grande.

And all news reports indicate the "caravan" is anywhere from 1000 to 1500 miles away from that border.  There was also a report this morning that Mexico is working hard to grant asylum to the walkers, so this dreaded invasion may never happen.

The border is "holy" now?  Sounds like something you'd hear about "Mother Russia" or the German der heimat ("homeland").  And, of course, it's the language (again) of white supremacists. 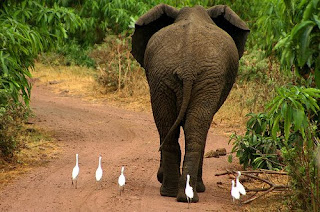