Meanwhile, back in the voting booth 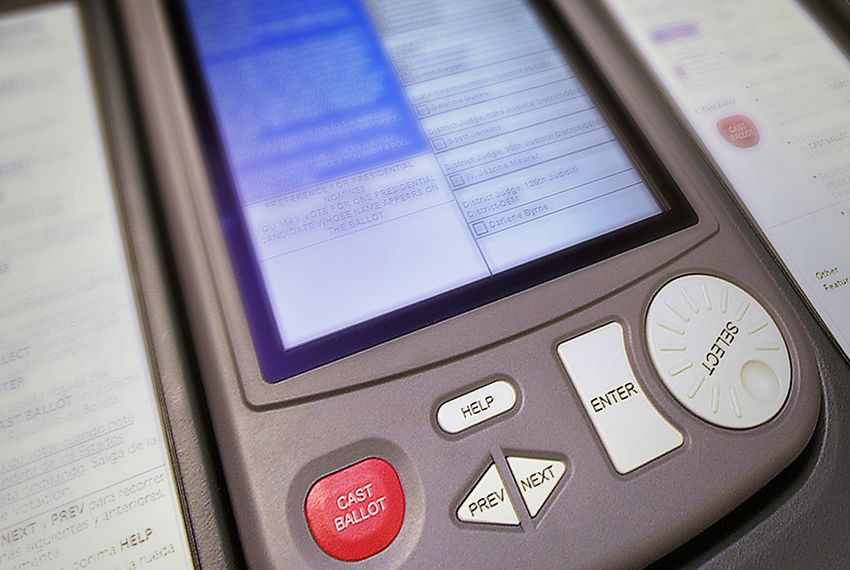 I went to vote on Sunday afternoon.  I've been there before when the lines were so long we had to snake through the building from one side to the other.  There were no lines that afternoon, but the signs still pointed us through the building to a central room obviously marked off to accommodate a large number of people in a small space, leading finally to the room with the voting machines.  The room was full, almost every machine occupied, but the process went quickly and the longest time I spent was checking my ballot before casting it, to be sure it said what I wanted it to say.

That's because I'm not hasty in voting, and I'd heard about people seeing their vote for Cruz or O'Rourke changed to the opposite.  I assume that meant they went back and changed that vote, since the machine in question, like the one in the picture, shows you the entire ballot you are about to cast before you cast it.  In Texas that means a ballot that runs for several pages on the screen, because we elect everyone from U.S. Senators to dog catchers.  The number of judges we elect (district, county court-at-law, Justices of the Peace, municipal) alone is breathtaking.  There are multiples of each in any large county (like Harris), and you end up with three choices:  straight ticket (still allowed under Texas law, apparently a curiosity in other parts of the nation, but soon to be banned here, I'm sorry to report), throw darts (i.e., pick randomly), or skip 'em altogether.

Being a proud yellow dog Democrat since '64, I voted a straight ticket.  I carefully checked to be sure my ballot reflected my preferences, the only way to vote on these machines.  But I noticed that  voting was lively, even at 5:00 p.m. on a Sunday.  The parking lot outside was full.  I can't imagine how people parked around that building in order to create the lines that had been prepared for (and undoubtedly responded to).  People must have parked across the streets (the building is on a corner) and dared the Houston traffic (notoriously pedestrian un-friendly).

I also noticed people were taking it quite seriously.  No surprise, but I think the primary reason voter turnout in Texas is low is because the ballot is so intimidating.  When I was a practicing lawyer appearing before judges in Travis County, I could barely keep up with the array of judges up for re-election or election (worse, because who know how competent they were?).  People who don't work with judges can't possibly know who to vote for.  Then there are the clerks (county and district), the County Commissioners (local county government), the County Judge (head of the Commissioner's Court, not a law judge), and municipal elections (mayor, council members, etc.).  It's a product of 19th century populism, but it's exhausting.  Easier to ignore the whole business, especially when the political culture is so attuned to bidness and taking care of bidness.  Which is not to say the political culture of Texas is going to change with this election; but the tectonic plates may just shift a bit.

We'll just have to wait and see.  Beto's campaign texts me several times a day right now (me and several million other Texans), and they claim young people are voting at rates twice of what was recorded in 2014.  The 30 counties in Texas (of 254) that account for the largest number of registered voters exceeded the turnout of all early voting in 2014 in just 5 days this past week.  Something is moving.  Whether it is a rough rude beast, and whether it is heading toward Bethlehem, remains to be seen.