She Blinded Me With Science! 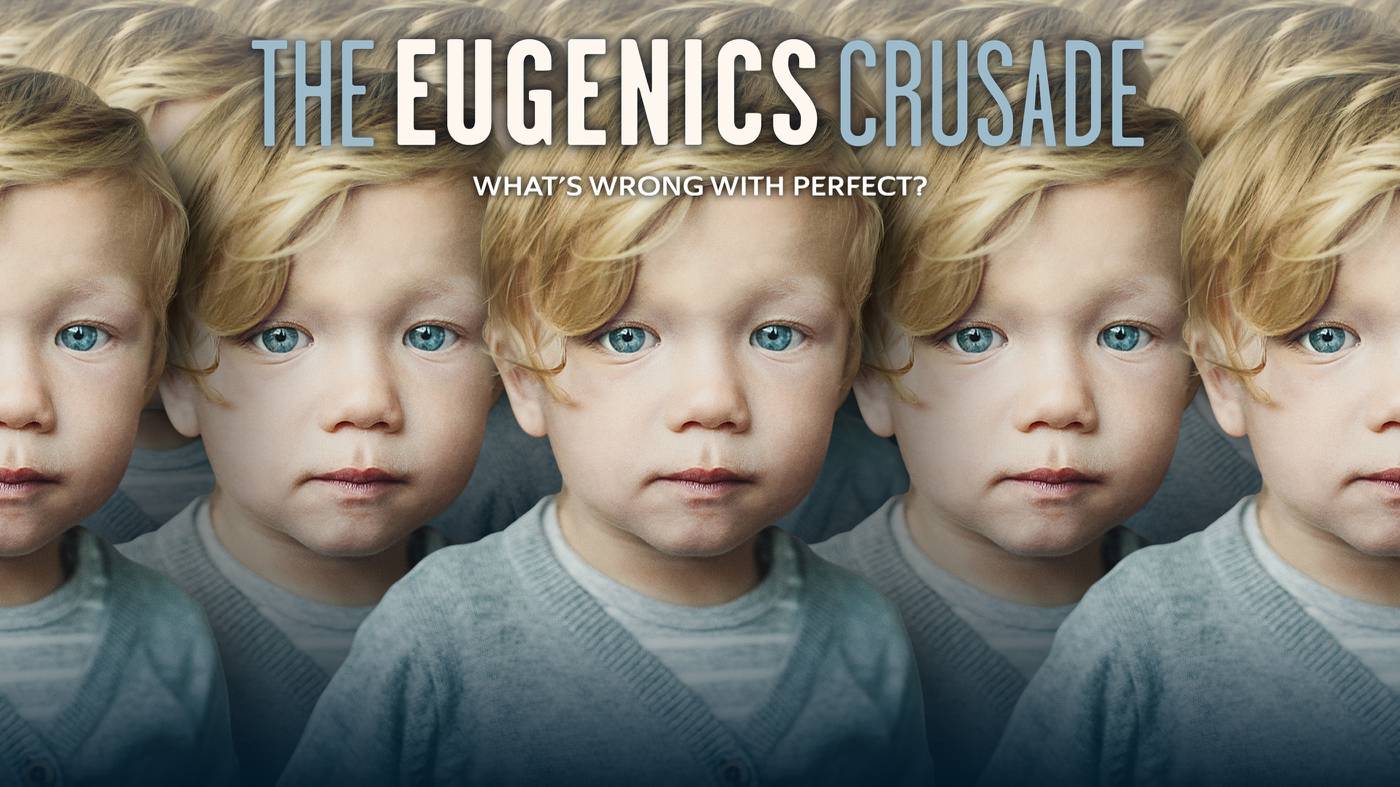 "Examined at headquarters after a trip of intense strain and weariness, the prisoners all proved to be of a very low, mixed-blooded, and mentally aberrant type."

So "faith" is believing what "ain't so." And it is bad because it creates blind adherence to ideas which damage people and then society.

"The American Experience" reviewed, in two hours, the history of eugenics in America, a history that starts with Darwin and creates the word "eugenics" (coined by an American from Greek, the word means "well-bred." Listening to the scholars on the show talk about the desire to secure utopia that eugenics was supposed to deliver, one wishes they would remember Thomas More coined that word from Greek, too. It means "nowhere."), an idea that all too quickly exploded into law and national policy in the 20's and 30's. It rose as church affiliation fell to its lowest point in the century. Trust in God replaced by trust in science. God will not improve the world, but science will. William Jennings Bryant, the man mocked in the movie about the Scopes trial, actually opposed the abuse of people in the name of science. He was a very religious man, not the man of science Darrow was, and yet we still only remember Bryant as a caricature. Although science eventually rejected the idea of eugenics, it didn't reject the reasoning behind it.  And it wasn't science that turned the public against it.

Do you know the story of Carrie Buck? She was in the state foster care system of Virginia, raped by an adult, and made a test case by a prosecutor and a court appointed lawyer who wanted her case to set the law of the land by the Supreme Court. The idea they were promoting was forced sterilization.  Like Mr. Snopes (who was never in any danger of imprisonment), Carrie Buck was simply a pawn in a game of would-be kings. They got her case to the Supreme Court where Oliver Wendell Holmes, the Antonin Scalia of his day, thundered that "Three generations of imbeciles is enough." The opinion opened the floodgates of forced sterilization across the land.  In the 6 years before it, 6,000 Americans were sterilized.  In the six years after, that number was doubled.  Before the practice was finally repudiated decades later, as many as 60,000 had been forcibly sterilized.  The commonest denominator was their social class. They were poor.

The documentary mentions a Hollywood movie from the '30's, in which our heroine, young and photogenic, is forced to undergo sterilization because her family is nothing but criminals, prostitutes, and the impoverished.  She is spared the indignity at the last moment when it turns out, not that that law or science is wrong, but that she's adopted!  No inherited taint!  Thus did society start to reject the laws of eugenics; they shouldn't apply to innocent young beautiful white women.  We held on to the reasoning, we just thought ourselves more careful about applying it.  We didn't crucify mankind on a cross of gold. We sterilized them in the name of science.  Eugenics laws remained on the books long after we rejected their premises. We forgot why we did, but we kept doing it. And we keep the notion alive to this day:

Sen. Lindsey Graham (R-S.C.) weighed in on what a DNA test could potentially reveal about his ancestry on Tuesday’s “Fox & Friends,” awkwardly quipping: “I’ll probably be Iranian. That would be like terrible.”


Blood determines who you are; and wouldn't it be awkward to have even "one drop" of the wrong blood?

And when did our public fascination with eugenics end? It began to crack in the Great Depression, when the "best" people were poor, too.  Of what good were "good genes" and "pure blood" if you wound up in the bread lines? It became a pseudo-science when the Nazis took this very American science (we did invent it) and our eugenics laws, and turned it into the Holocaust. We repudiated it as quickly as we had embraced it.  Science didn't stop it or correct it in America; horror and humanity did.  Even Gene Roddenberry recognized the power of it, as he posited a "Eugenics War" in his "Star Trek" universe.  It gave rise to one of the Kirk's most famous adversaries ("KHAN!!!!!!"), but it's largely disappeared from the ST canon.  What we don't remember we are doomed to repeat?  Probably Roddenberry thought so.

Interestingly, after WWII American church attendance exploded to levels not seen since the Puritan colonies had made it mandatory. Correlation does not equal causation, but what an interesting set of coincidences it is.

Seems we can put our faith in science to our detriment, too.  Because the basis for the rejection of eugenics is obvious:

Here was a way to use science and some apparent common sense to make the world safer, more rational, and more efficient. This objective measurement scheme would force inefficient judicial institutions to abandon ineffective approaches and help law enforcement and lay citizens alike to know who to hold in suspicion. It would, in short, make the world a better place. The problem was that this approach, in trying to map the coordinates of human nature onto an “objective” matrix, merely reinscribed colonial and imperial racial and sexual logics, as well as an endemic bourgeois hatred of the working classes. Lombroso, of course, didn’t think of it that way. Substituting his best intentions for serious inquiry, he imputed a value system designed to stratify people through biology.

Trust us!  We're scientists!  Besides, we left that all behind in the 30's, right?

Physiognomy was eventually debunked, but its legacy of what Cedric Robinson calls racial thinking has lived on in Silicon Valley’s cultural imaginaries. Lombroso’s theory was, like a great deal currently coming out of the world of tech, an engineering “solution” in search of a problem. It’s no surprise that all types of Victorian theorizing, often translated into more contemporary languages (think “genetics” instead of “racial atavism,” or “evolutionary psychology” and Jordan Petersen’s lobster tales instead of the “feminine sphere” or the “weaker sex”) so animate research and product development that, to quote Virginia Eubanks, the tech industry is “automating inequality.” Physiognomy and related bunk sciences like phrenology have never truly left, and the heavily capitalized project of turning the world into a datafied engineering project means that it is more central than ever before.

The progenitor of eugenics was physiognomy; when that was debunked, eugenics took over.  Eugenics was eventually rejected, but the driving forces behind both attempts at science are still with us, indeed, still present in our science and our faith (trust) in science.  And the real problem is, science never really rejects the premises of "bad" science; it just declares the extremes "pseudo-science," but it keeps the basic reasoning and applies it in new and improved ways:

“Science” here functions as a corrective for those technologists who seek to push possibilities too far. “Better” science and “better” ethics do not ask too much of their technologies. This posits digital physiognomy as overreaching, redeeming the more sober mundanities of biometrics in general.

To talk about phrenology “reappearing” in contemporary technologies misses the fact that its underlying logic never left. To the extent that “science” debunked the most egregious elements of physiognomy, it did so by driving the same premises of deducing character from physical characteristics deeper into the body. Rather than look for a person’s essential nature in their face, research looked for it in DNA, in hormone levels, in imperceptible but nonetheless determinate physical materials. This process, often against the aims of the researchers, has had the predictable effect of re-encoding racial taxonomies in genomic studies, rigidifying sexuality as “genetic,” and legitimating class exploitation as a product of physiological inheritance. The widely derided criminality and the sexuality studies both rely (spuriously) on this type of “legitimate” research to justify their claims.


Just to carry that argument forward to its conclusion:

Most refutations of the criminality study included as part of their argument an explanation that “criminality” is likely driven by a combination of biological and environmental conditions. In particular, testosterone levels have been shown to contribute to the type of “risky” behavior that leads to criminality. This correlation between testosterone and behavior seems to hold across a number of animal species, but animals do not commit crimes. Testosterone levels might be correlated with certain types of behavior, but the biological tells us literally nothing about “crime,” a category of human social organization.

If we’re looking for a real “root cause” of “criminality,” we should look not to biological factors but to politics, which organizes how a society decides what is and is not a crime and how punishment is to be administered. The sort of risk taking and violence associated with testosterone is, after all, just as often lauded or ignored as it is considered dangerous. Politicized attitudes about race, class, and sex tend to determine whether biological factors are seen in one way or another.

Arguing that physiognomy and phrenology were dominant until “of course, science happened” is a misrepresentation. It wasn’t “science” that happened; it was the civil rights movement. The root problem with the recent phrenology and physiognomy studies is their political implications: that they could give a scientific-seeming alibi for monitoring, impoverishing, or incarcerating people, much like earlier social Darwinism helped legitimate racial regimes. If that is the main problem with the “pseudosciences” of phrenology and physiognomy, we need to consider how biometrics in general — routinized facial recognition, gait recognition, and “behavioral” biometrics to list just a few — performs these same core functions.

Or how much of the same core functions of eugenics are still with us as science, even as eugenics is considered a "pseudo-science"?*  What do we trust, and why?

If you watch the PBS documentary, you'll see how much the proponents of eugenics and immigration control, sound exactly like Donald Trump.  You'll see how much hasn't really changed.  A famous actress in the 1920's told the nation that without immigration control, (the control of immigration from central and southern Europe, Catholics rather than the Protestants of northern Europe and Britain.  Now it's Muslims and people from South America.), the nation as they knew it would cease to exist. Everything old is new again.  The past isn't over; it isn't even past.

*This issue is actually underscored in the documentary itself.  It begins with Dr. Charles Davenport, who coined the term "eugenics," traveling to England to meet with Francis Galton, cousin to Charles Darwin.  Davenport and Dalton agreed that "survival of the fittest" meant some humans were more fit than others.  This is presented, almost immediately, as a distortion of Darwin's work, rather than the logical extension of it which Galton championed and Darwin approved of.  The connection to evolution and eugenics is maintained, but evolution itself is cleansed of any "genetic" taint.  It turns out eugenics was an orphan, not a descendant!  How convenient, and how trusting.