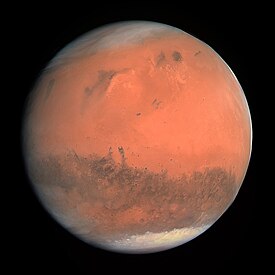 I've got a new hobby horse, and it's the colonization of Mars.

The discussion always goes on at the level of experts in technology and space travel and computers, like those assembled by Vox for an article on the subject.  Nobody ever asks a farmer or soil expert, however.

I've been buying a lot of potting soil in recent years, potting lots of plants to put around the house.  I noticed quickly that the best stuff was not like the stuff I used to get:  there's almost no dirt in it.  Instead it's all organic material, practically compost.  And when I plant bushes, and buy the stuff meant to help them root and thrive, it's compost, too.  It ain't "soil."  It's meant to be added to the dirt you're going to be digging in, but it's meant to add something to make the plants thrive:  and that something is, basically, dead plants.  Dead plants, and microbes.

I have a memory from somewhere in my public school education of being taught about top soil:  that the first plants had to grow in basically pulverized rocks, decay, and begin creating top soil.  I remember the history of the Dust Bowl, when the top soil blew way in the middle of the country, in some of the richest farmland on earth.  Rich not because we had a lot of dirt to spare v. the rest of the world, but rich because of the top soil:  because of the centuries of dead plants built up there.  Basically, without top soil, you're trying to grow plants in sand.  Even the cactus and succulent mix in the garden centers is not just a bag of sand.

And yeah, I've heard of hydroponics, but that requires feeding the plants an abundance of fertilizers, and having an abundance of water available.  Mars has precious little of the latter, and if you're going to have to ship in the former, it's not going to make it easier or cheaper to grow plants that will sustain life.  Not to mention the rest of the ecosystem you need for plants.  I have soil additives designed specifically to promote microbe growth in the soil, because plants need those microbes to act in order to grow.  Symbiosis is to biology what simile is to metaphor; a small portion of something much more common and complex  than the concept implies.  I heard a report recently of geneticists studying microbes in the human gut, and ending up thinking its the microbes that tell you to drink a cup of coffee, because they need it for their purposes, and you need the microbes for your purposes.  Perhaps an upended view of things, but a view that upends, too, the top-down approach that assumes, among other things, if we can build the spacesuits and the rocket ships, we can live on Mars.  And it ain't just that  "Mars will be a more hostile environment than the top of Everest or the South Pole,"  Not to put too fine a point on it, but both places on earth have a significant lack of top soil, and yet it would be easier to grow a tree above the tree line than on Mars, and while Antarctica is a desert, it still has more available water than Mars.  And by the way:

In Antarctica, the average annual temperature ranges from -76 degrees Fahrenheit at the most elevated parts of the interior to 14 degrees along the coast.

So, yeah, any plant growing is going to be in heated conditions; which means you need an energy source, or you need to import.  You'll also need to heat the colony.  Where this energy comes from is anybody's guess.

And no, I don't really think Matt Damon could "science the shit out of this."  Maybe a few plants, but enough to sustain a colony?  With no top soil and water as scarce as hen's teeth?  You might eke out an existence, but who wants to fly to Mars just so they can starve to death?  And by the way, Elon Musk thinks he's living in a science fiction novel from the '50's:

(Musk contests that, saying that it’ll be adventurous people, not elite ones, who populate Mars.)

First, even adventurous people haven't tried to populate the Antarctic (it would still be easier than living on Mars), and secondly:  there's a reason astronauts are trained so carefully and for so long, and are such dull and technical people, rather than daring adventurers boldly crossing the seas of space.  In space, your life depends on the integrity of your engineered technological environment.  The least problem could be fatal to you and all aboard, and you can't wait for the repairman to fly up and investigate.  If you can't fix it when you find it, you and your fellow astronauts may die.  So a colony on Mars would have to all be experts in the design and operation and repair of all the systems that keep the colonists alive in a world with no breathable atmosphere and average temps colder than Antarctica in the dead of winter.  Anybody who can't fix the problem when they find it dooms the whole colony.  And that's aside from whether you could grow so much as one ear of corn.

Oh, and some of the best plant fertilizer is manure; except you'd have to ship that up to Mars, too.  You'd basically have to take everything with you, and keep taking it up there for as long as people were trying to live there.  You wouldn't have top soil so nutrients (including microbes) to keep the plants alive would be as critical as the engineered living spaces themselves (and how you power those is anybody's guess).  The least disruption in supply would mean death for all involved.  The "adventurous types" would soon be reduced to a life of constant attention to the basics of survival, basics already supplied on earth:  heat, atmosphere, available foodstuff.  A drought may endanger a region, a famine may engulf a country, but the rest of the world survives or even lends aid.  A similar problem on Mars would leave a ghost colony before word could get back to earth and the first ship in response arrive.  And we're destroying earth, but we're going to terraform Mars, because if we do one we can do the other, but we can't do it here?  Whose idea is that?