And then we bring back Liquid Paper.... 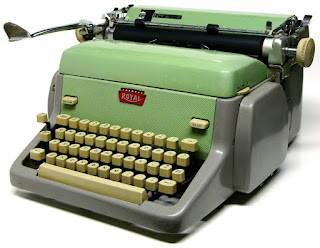 I'll admit it, I'm a little fuzzy on the whole "privacy" issue.

I didn't know about PRISM when I wrote my post about the NSA looking at "telephony metadata" from Verizon (and, it turns out, we can pretty much assume the government has the same order issued against all the other phone companies.  Anybody else remember "The President's Analyst"?  We always knew it would come to this.), but as I said:  does anybody really have an expectation of privacy in their e-mails?

I know anything I put into an e-mail can be forwarded to anyone else with a single mouse click, which is why I'm very careful about what I put into an e-mail.  How many times have I received e-mails where someone hit "Reply All," telling me things I not only didn't want to know, but probably shouldn't know.  Try doing that with a telephone conversation, or a personal letter.

The problem here is, as I said, less that:  "There is a massive apparatus within the United States government that with complete secrecy has been building this enormous structure that has only one goal, and that is to destroy privacy and anonymity not just in the United States but around the world."  The problem here is that we let that apparatus be legally built.  (Greenwald bravely told Lawrence O'Donnell that Sen. Diane Feinstein, who wants the leaks of this court order and of PRISM investigated, could come and get him.  Bravely, because he's somewhere in England [actually he usually resides in Brazil.  I made an assumption based on the newspaper he writes for, but I leave the original error because, at the moment at least, Greenwald is in Hong Kong, and, purportedly, "out of reach of U.S. jurisdiction."].  He knows that, at most, he would go to jail for contempt of court for not revealing his source, and Diane Feinstein is not a prosecuting attorney who is going to force him to testify before a judge.  Greenwald isn't at personal risk here, for all his bravado.  His sources, however, have Bradly Manning as their future.  Greenwald is a punk.)

Since I've wandered off into the subject of Greenwald, note the comparisons he wants to make about this:

The times in American history when political power was constrained was when they went too far and the system backlashed and imposed limits. That's what happened in the mid-1970s when the excesses of J Edgar Hoover and Richard Nixon became so extreme that the legitimacy of the political system depended upon it imposing restraints on itself. And that's what is happening now as the government continues on its orgies of whistleblower prosecutions, trying to criminalize journalism, and building a massive surveillance apparatus that destroys privacy, all in the dark. The more they overreact to measures of accountability and transparency - the more they so flagrantly abuse their power of secrecy and investigations and prosecutions - the more quickly that backlash will arrive.

There ought to be a corollary to Godwin's Law that, when you can't go to Hitler, you go to Nixon.  Let us recall history, which Mr. Greenwald probably didn't live through (I'm quite sure I'm older than him by a decade or two).  What Nixon did was both secret and illegal.  He didn't have FISA or the PATRIOT ACT to fall back on; nor did J. Edgar Hoover, who ran his own clandestine spying program pretty much on the basis of being able to blackmail any politician (and probably a few judges) in D.C.  I don't feel completely comforted by the explanation of James Clapper that this is all legal and approved, because that isn't exactly full disclosure.  But it is at least within a legal framework; and therein lies the problem.

I would rather that terrorism be treated like a crime, not a national security issue.  But unless you haven't been paying attention, the Congress has made it clear since at least 9/11 that it doesn't want to treat any terrorist like a criminal.  They won't shut down Gitmo; they forced Obama to back down on prosecutions in New York City; Republicans still excoriate him as "soft" on terrorism because he wants to put any suspected terrorist on trial at all.  And every member of Congress since 9/11/2001 has been elected to office, and none of them perceive their jobs to depend on treating terrorism in any other way.

The problems here, in other words, are profound:  and Mr. Greenwald is anything but a profound thinker.  The Congress has been quite comfortable with this program, as evidenced by the statements coming out of the Senate and House yesterday.  No one was scrambling for the exits or trying to run away from this one, unlike the IRS scandal which really isn't a scandal and touches no one, or Benghazi Benghazi BENGHAZI!  Indeed, the American public seems to be pretty blase about this:  as O'Donnell told Greenwald, everyone O'Donnell spoke to shrugged and said "I figured the phone company was compiling that data anyway."

And so we're back to that linchpin of Constitutional analysis, the reasonable expectation of privacy.

I expect privacy in my mail (unless I send a postcard); that's what envelopes are for.  And lest we forget, the "Unabomber" was so successful (sadly) because he didn't use electronic communications.  He was so off the grid it was his manifesto that finally tripped him up, and that only because his brother recognized the ideas in it.

Anyway, my reasonable expectation of privacy in my letters is that the recipient won't pass it on to ten other people; unless it's a chain letter, of course (does anybody do those anymore?).  My reasonable expectation in a phone call is that no one is listening to the conversation, or can listen to it, except the person on the other end.  But when I make a phone call, or send an e-mail, or post anything at all on the internet; am I supposed to be surprised the government might be looking at it?  Am I really surprised that the whole world could be looking at it (ahem!), in a world where videos go "viral" and an e-mail can circumnavigate the world faster than a lie can outrace the truth?  The person who leaked the news of PRISM to the Washington Post said: “They quite literally can watch your ideas form as you type.”  Well, you want a connected world, you get a connected world.  You don't want them to watch as you type, then print a letter.  Better yet, drag out the old typewriter.  Wendell Berry would approve.

Maybe we should restrict this; but the fact is, we haven't.  This isn't Nixon and J. Edgar Hoover because we now have laws which allow the government to collect this kind of information.  Should we have such laws?  That's a valid conversation, a debate I would happily engage (no, is my answer.  I don't like FISA and I don't like the PATRIOT ACT (which is its name; the title is an acronym, not an informal nym)).  According to Sen. Mark Udall:

“As it is written, there is nothing to prohibit the intelligence community from searching through a pile of communications, which may have been incidentally or accidentally been collected without a warrant, to deliberately search for the phone calls or e-mails of specific Americans.”


This strikes me as the real problem.  Whether we will change it or not, is the question.

But how do I really feel? 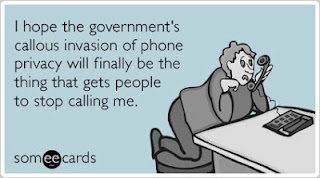