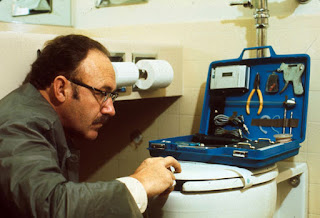 How much access to information did Edward Snowden have?  And how much did he think he had access to?

In a few more days the narrative is going to harden into rigid form, and we may likely not remember how fluid the stories were back when information was coming out and all of it was getting through.  The Narrative will act as a filter, deciding what information applies, and what doesn't.  The information will still be there; but most of it will be ignored.

The Narrative will decide what information is relevant.

This isn't nefarious, or evil, or malignant.  It's just the way we "do" the news.  A common narrative will be agreed upon, and all the information that supports that narrative will be reported.  If it doesn't support the narrative, or immediately indicate a new and more compelling narrative (which means the information carries a lot of detail and structure with it), new information will be discarded and the Narrative will either continue on, picking up more and more pieces of detail; or it will head for the elephant's graveyard, never to be heard from again.

Remember the oil spill in Arkansas, all that shale oil spilling everywhere?  It didn't work its way into the narrative of the Keystone pipeline, even though it proved Keystone was not going to be unique, or the first to carry that sludge from the North.  It challenged the Keystone narrative, in point of fact; and so it disappeared.  Damned inconvenient to note that if Keystone was defeated, older pipelines would just bring that stuff down anyway.

Besides, who cares what happens in Arkansas?  It's not New York City or El "A" or Philadelphia, so fuggedaboutit!

This is the power of the Narrative.

Back to my subject:  the real issue here is not that Snowden leaked this information (though that's not a small point), but that he had access to it.  A guy who would ordinarily be considered in the probationary period of any company has Top Secret clearance to access NSA data?  Whiskey Tango Foxtrot?  Who's running this clown show?

Edward Snowden was originally reported as a "career intelligence officer."  Uh, no:  "he turned out to be a twenty-nine year-old who was essentially a contracted IT guy for the agency without a background in national security policy."  Which is much better, isn't it?

While leaker Edward Snowden says that he was a spy for almost his whole adult life, his background suggest he wasn’t an agent so much as systems admin or engineer for most of it. He reportedly attended a Maryland community college to get enough credits for a high school diploma and was studying computing, but never completed the course work and later received a GED. He then enlisted in the Army in 2003 and become a security guard at a covert NSA facility at the University of Maryland. From there he leveraged his computer skills to get a job doing IT security with the Central Intelligence Agency (CIA), leaving in 2009 to become a private contractor serving at a variety of NSA locations — That’s the role where he became “hardened” as he watched President Obama advance “the very policies” he thought would be reined in.

Which explains why Charlie Pierce detected more than a whiff of pulp fiction about Mr. Snowden's interview in the Guardian.

And here, I think, is where the narrative should go:  right back, if you will, to the original weakness of 9/11:

Some of Snowden’s claims seem far fetched — like that he personally had “the authorities to wiretap anyone, from you or your accountant, to a federal judge or even the President” — but as one of the guys doing internal network security for the agency, Snowden did likely have a fairly far-reaching ability to access documents and chatter flowing through the system. IT security folks need to have a certain level of authority to dig down and look at what’s happening in order to investigate possible security breaches and determine their sources, although there should be an auditing system in place to determine how often someone is looking at things they have no reason to be accessing.

Two points, and then back to 9/11:  first, Snowden is filling in the blanks in his ignorance because, while he has access to information, he has no understanding of it.  Back to the world of spycraft as portrayed by John Le Carre or "Six Days of the Condor:"  drudge work, in other words, piecing together disparate bits of information, never quite sure that what you have is reliable, that your sources can be trusted, that your interpretation is sound.  Snowden sounds more like the guy reading a murder mystery who thinks he's figured it all out by the second page, when he doesn't stop for a moment to consider he doesn't know what he doesn't know.

And that puts us back in the middle:  the government has denied this program is what Snowden and Greenwald say it is, or that PRISM does what WaPo (and Snowden) said it does.  Who is telling the truth?  Is it possible Snowden knew far less than he thought he did, and surmised a great deal about which he was wrong?  Is it possible the government is lying, is scurrying like bugs when the rock is turned over, trying to restore order after chaos has revealed far too much?

Snowden's credibility is subject to question.  His conclusions should be subjected to scrutiny.  To the extent he has no data to support his conclusion, they should be called into doubt.  And while the issue here should not be to shoot the messenger and ignore the message, the question of whether the message bears any relationship to reality needs to be scrutinized.  The NSA may have very good reasons to lie; but that doesn't mean Snowden is telling the truth. It may be the truth as he knows it; but what does he know?

So there are two points:  Snowden's knowledge, and Snowden's credibility.  And still the real issue is with the government: what is someone like Snowden doing with enough security clearance (supposedly "Top Secret," but honestly I'm beginning to wonder) to reveal things like this, especially after only 2 months at the job?  I've known people who worked military intelligence, who took great pride in keeping secrets, in not telling their wife and children what they were doing.  If we are going to give people security clearance, they need to be people like that; not people like Edward Snowden.

Which brings us back to 9/11.  Wendell Berry pointed out, after the towers fell, that we were the victims of our own technology, and our own faith in technology.

From In the Presence of Fear, Three Essays for a Changed World, The Orion Society, Great Barrington, MA, 2001, p. 3.

Well, we may have done it again:


However, the larger takeaway here is that as all sectors of our society have become more reliant on computer networks, system admins and IT professionals at large generally have much broader access to the information been carried across those networks than even the people directly responsible for the content flowing through the system. It’s certainly scary that the NSA wasn’t more careful about their custodial and auditing systems. But at its heart it looks like the reason the NSA documents are coming out now is the same reason you don’t want to look at porn at work: Your IT team sees all.

Maybe that's why Edward Snowden had a "Top Secret" clearance with no almost no employment history at all.  Maybe we found the Achilles heel in our entire security structure, and maybe the real story here is that we aren't as secure as we imagine we are.