The Eyes of the World Were Upon Them.... 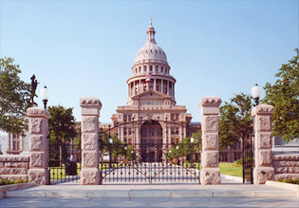 I was up at midnight watching this on-line.  I had a hard time finding out in real time just what was going on (turns out the filibuster effectively ended at around 10, but Democrats in the Senate were able to tie up proceedings until nearly midnight, when the crowd in the gallery took over).  I had an even harder time finding out what had just happened.  There was a vote called, but the crowd was so noisy the Lt. Gov. ("Lite Guv," we say down here, thanks to the late Ms. Ivins) seemed to suspend the vote.  Before he could announce a result there were cries from the floor of "It's midnight!  It's midnight!", and a lot of milling about by Senators who didn't seem to know if they should stay or go.

The scene itself was impressive.  The Capitol in Austin sits on 15th street.  The line at 11:30 last night of those wanting to get into the Senate Chamber reportedly stretched all the way down to 11th street.  Wendy Davis reportedly went international.  The whole world, quite literally, was watching; and this morning, I think that's why David Dewhurst threw in the towel at 3 a.m.  He knew he'd never get away with it.

Not that he didn't try:

“With all the ruckus and noise going on,” Mr. Dewhurst said, he could not complete administrative duties to make the vote official and sign the bill. Senate Democrats and women’s right’s advocates said the real reason the vote could not be made official was a time stamp on official documents that showed the bill passed after midnight. The Legislature’s official Web site first posted that the Senate’s vote occurred on Wednesday, after the midnight deadline, but the date was later changed to Tuesday for unknown reasons.

The reasons, actually, are not unknown; whodunnit is more the question.  But it didn't work; Dewhurst knew he couldn't get away with fudging computer records and turning the Senate chamber into a time machine, so he folded.  It was also just perfectly plain, as of 1:15 this morning,  that the records had been altered.  Hard copies are hard to argue with.

It also appears the arcane Texas Constitution once again reared it's beleaguered head and made a difference here:

Republican senators made a last-ditch effort to approve SB 5, voting 19-10, but by then the clock had ticked past midnight. Under the terms of the state Constitution, the special session had ended, and the bill could not be signed, enrolled or sent to the governor.

So shenanigans and ill intent were defeated, for once.  Shenanigans because it was obvious to anyone watching last night that the rules of the Texas Senate which control filibusters were wielded, albeit in gentlemanly fashion (there was a fascinating debate around 7 p.m. about civility on the Senate floor. I caught that live.), the rules are what the majority says they are.  The 7 p.m. debate was on a point of order about whether another Senator helping Sen. Davis strap on a back brace had violated the filibuster rules.  The factual issue was less important than the excuse to vote on a point of order, which went along party lines.  The final point of order, that Sen. Davis had strayed from a discussion of matters germane to the bill under consideration, is what brought the filibuster to an end.  That vote, too, was a foregone conclusion.  Nobody watching could doubt the Republicans were looking for any excuse that would legitimate ending the filibuster, although they weren't so ham-handed as to do it on the slimmest pretext possible.

The whole world was watching, after all.  That "unruly mob" in the gallery, as the Lite Guv. would later call them, clearly had some impact.

And even Rachel Maddow finally recognized that Texas is the 2nd most populous state in the country, and what happens here actually does affect a whole lot of people.

Maybe that kind of attention will help us out.  Even if none of this might have happened without the Voting Rights Act. But let's leave the last word to the Lite Guv.:

"I didn't lose control of what we were doing," he said. "We had an unruly mob."

Or maybe it was just an unruly bill.  Democracy sux, don't it?