There has been a Texas sized hole in American politics since LBJ left office.  I sense that may be changing. 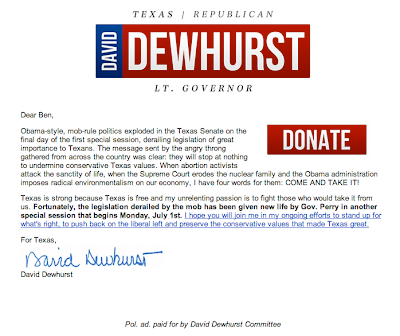 That's the Lite Guv reacting to a Capitol building that looked like this: 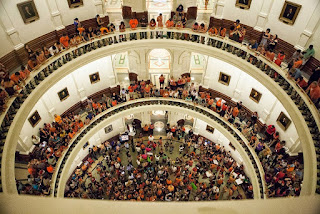 To give you some idea of scale, the Texas Capitol is the largest state capitol in the country; it is second in size only to the Capitol building in Washington, D.C. That interior space is enormous; I'm still trying to imagine it filled with people, even as I look at the picture.  The Capitol sits on 51 acres, with the building proper a full city block removed from 11th street, which fronts it.

Reports that lines stretched down to 11th Street from the Capitol the night of the filibuster mean it stretched a full block away from the entrance.  And this crowd was not from across the country; it was from across the state, although the whole world was watching.

The night of the filibuster, Dewhurst tried to claim the vote occurred in a timely manner, despite the fact the computer timestamped the vote as occurring on Wednesday, after the session had expired (one Senator shouted from the floor that he had a "Constitutional point of order!" regarding that vote).  3 hours later Dewhurst finally had to concede he'd lost, but he did it be covering up the fact the computer record had been altered (a felony, actually).  He said the vote was timely, but  he didn't have time to sign it before the Senate, so based on that arcana he ducked the issue.

The whole world was watching.

And finally the world is noticing that Texas is the 2nd most populous state in the nation, and what happens here affects a lot of people who don't live in California or on the East Coast.  But more importantly, people in Texas are getting agitated.  That crowd in Austin wasn't celebrities who flew in just to wear orange t-shirts and not get on TeeVee.  It was Texans who, as Cecile Richards said, were finally fed up.

Now, will this be Wisconsin and the recall effort that wasn't?  I don't think so.  One thing about special sessions:  legislators don't like 'em.  Texas is cheap, and legislators don't get paid enough to take six months off work to come to Austin; but they agree to, every two years.  Special sessions extend that visit, and the first one might be free, but the second one costs.  A third one?  You may have a mutiny on your hands.  There are also, as the Senate filibuster rules show, lots of ways to gum up legislative proceedings, and the Lege has three items on its agenda for this session.  One is the hot button of abortion, which has already failed twice (once in regular session, and then in the special); the other two involve matters of substantive law (transportation and criminal law).

Everything starts over in a special session; they don't get to pick up where they left off.  If the House and Senate don't get the transportation issue, especially, handled soonest, they'll never get to it, and they'll have to come back a third time.  More than a few in the Lege won't appreciate that, and Dewhurst is already taking a lot of heat for screwing up the last session.  So don't expect abortion to be front and center, especially when roads in Texas are on the line.

By the way, the first session was taken up first with passing redistricting maps which were already in existence, and which the GOP easily rammed through.  Still, that took up most of the session, and then the legislating work to ban abortion had to begin, along with the criminal law changes and the transportation funding.  So those who say this is a "done deal" in Texas, are wrong.

And there's always the option Texas championed in the '70's, and revived again in this century:  the walkout to deny the House a quorum.  Despite Tom DeLay's attempts to nationalize that issue the last time Texas redrew its districts, the Dems stopped that the first time around.  If they can (or have to) use that to stop this anti-abortion bill a second time, don't expect Perry to call a third session just for this.

He may not get a quorum of Republicans to come back to Austin for yet another 30 days.

Dewhurst's appeal to the Gadsden flag crowd and to nativist Texan xenophobia may be a useful fundraising tactic, but Dems are organizing, too.  Battleground Texas is already reaching out to Texans to get Dems energized and organized; it's the first real effort I've been aware of since Anne Richards lost to George W. Bush. That "angry mob" language might work in a few quarters, but rather like the slow acceptance of gays and lesbians, people across Texas are going to recognize that they know the people in that crowd, or know somebody like them, and the image won't stick long.  Will this be a turning point?  What have I got, a crystal ball?

It will, at least, get interesting.  And if the nation starts paying attention to Texas, it might even crack the rock this state has been living under since people got bored with the image of the cowboy-hatted Texas oilman flying his private plane downtown for lunch with the longhorn horns on its engine cowling, and every yard dotted with an oil derrick.  Maybe if we finally start getting some attention down here, people will stop thinking Texas is Austin and the rest a god forsaken wasteland, and politicians will find others are paying attention to what they're doing.

Adding:  Because it meets so briefly and infrequently, more than most legislative bodies the Texas Legislature functions on some respect for the rules and each other (there was a long discourse on this by Sen. Whitmire , the "Dean" of the Texas Senate, during the filibuster).  There is evidence that has been lost, sacrificed to the political ambitions of the Man Who Would Be Rick Perry (the Lite Guv.).  If the Lege is going to start three bills from scratch and pass them in 30 days, they need some comity to do that with.  Sen. Davis has already indicated there should be an investigation into the matter of the altered timestamp.  She may not get it, but this last session may have left a bad taste in everyone's mouth, and forcing a do-over may be the worst political mistake Messrs. Perry and Dewhurst have made.