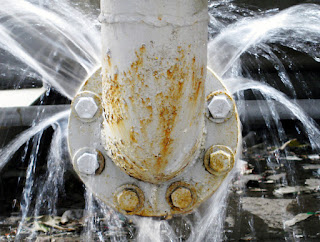 This sounds just as bad as Charlie Pierce makes it sound:

You want "Nixonian"? This, right here, this is Nixonian, if Nixon had grown up in East Germany. You've got the entire federal bureaucracy looking for signs of "high-risk persons or behaviors" the way Nixon sent Fred Malek out to count the Jews. You've got created within the entire federal bureaucracy a culture of spies and informers, which will inevitably breed fear and deceit and countless acts of interoffice treachery. (Don't like your boss at the Bureau Of Land Management? Hmm, he looks like a high-risk person. Tell someone.)

Until you find out this started, not with Nixonian paranoia, but with, well, leaks.  Leaks, and violence:


Obama launched the Insider Threat Program in October 2011 after Army Pfc. Bradley Manning downloaded hundreds of thousands of documents from a classified computer network and sent them to WikiLeaks, the anti-government secrecy group. It also followed the 2009 killing of 13 people at Fort Hood, Texas, by Army Maj. Nidal Hasan, an attack that federal authorities failed to prevent even though they were monitoring his emails to an al Qaida-linked Islamic cleric.

An internal review launched after Manning’s leaks found “wide disparities” in the abilities of U.S. intelligence agencies to detect security risks and determined that all needed improved defenses.

Which, as the saying goes, is a whole other kettle of fish.

Is the "Insider Threat Program" a vast overreach?  If what McClatchy reports is true, it sure looks like it, but the worst excesses seem to be reserved for the government departments most likely to harm the national interest:

The Defense Department anti-leak strategy obtained by McClatchy spells out a zero-tolerance policy. Security managers, it says, “must” reprimand or revoke the security clearances – a career-killing penalty – of workers who commit a single severe infraction or multiple lesser breaches “as an unavoidable negative personnel action.”

Employees must turn themselves and others in for failing to report breaches. “Penalize clearly identifiable failures to report security infractions and violations, including any lack of self-reporting,” the strategic plan says.

Please notice that requirement seems to be limited to the Defense Department, and is not part of a nationawide order to the "federal bureaucracy" (something I thought existed only in the heads of the most passionately right wing, and then only when it involves helping brown people or poor people, and never when it involves the military).  This is the part that so concerns Mr. Pierce:

The program could make it easier for the government to stifle the flow of unclassified and potentially vital information to the public, while creating toxic work environments poisoned by unfounded suspicions and spurious investigations of loyal Americans, according to these current and former officials and experts. Some non-intelligence agencies already are urging employees to watch their co-workers for “indicators” that include stress, divorce and financial problems.

“It was just a matter of time before the Department of Agriculture or the FDA (Food and Drug Administration) started implementing, ‘Hey, let’s get people to snitch on their friends.’ The only thing they haven’t done here is reward it,” said Kel McClanahan, a Washington lawyer who specializes in national security law. “I’m waiting for the time when you turn in a friend and you get a $50 reward.”

Well, maybe.  That is a concern; then again, so are Bradley Manning and Nadil Hasan; and now, Edward Snowden.

The policy, which partly relies on behavior profiles, also could discourage creative thinking and fuel conformist “group think” of the kind that was blamed for the CIA’s erroneous assessment that Iraq was hiding weapons of mass destruction, a judgment that underpinned the 2003 U.S. invasion.

“The real danger is that you get a bland common denominator working in the government,” warned Ilana Greenstein, a former CIA case officer who says she quit the agency after being falsely accused of being a security risk. “You don’t get people speaking up when there’s wrongdoing. You don’t get people who look at things in a different way and who are willing to stand up for things. What you get are people who toe the party line, and that’s really dangerous for national security.”

I don't think bureaucratic groupthink is fomented by excessive government concerns with leaks and national secrecy.  Then again, given the Wikileaks case, and now Snowden's secrets, are these concerns with secrecy excessive?

Of course, and obviously, the program isn't working:

There are, however, signs of problems with the program. Even though it severely restricts the use of removable storage devices on classified networks, Snowden, the former NSA contractor who revealed the agency’s telephone data collection operations, used a thumb drive to acquire the documents he leaked to two newspapers.

“Nothing that’s been done in the past two years stopped Snowden, and so that fact alone casts a shadow over this whole endeavor,” said Steven Aftergood, director of the non-profit Federation of American Scientists’ Project on Government Secrecy. “Whatever they’ve done is apparently inadequate.”

And here, really, is the problem:

Stopping a spy or a leaker has become even more difficult as the government continues to accumulate information in vast computer databases and has increased the number of people granted access to classified material to nearly 5 million.

Revoking security clearance is a "career killer," but really, how secure are we if 5 million people have such clearance?

The article says far more than Pierce does.  "Nixonian"?  Nixon wanted to punish his personal enemies.  Obama wants to shut down a kind of transfer of information absolutely impossible without contemporary technology.  Is he doing it in a ham-handed fashion?  Yes.  But the devil is in the details:

The program, however, gives agencies such wide latitude in crafting their responses to insider threats that someone deemed a risk in one agency could be characterized as harmless in another. Even inside an agency, one manager’s disgruntled employee might become another’s threat to national security.

Obama in November approved “minimum standards” giving departments and agencies considerable leeway in developing their insider threat programs, leading to a potential hodgepodge of interpretations. He instructed them to not only root out leakers but people who might be prone to “violent acts against the government or the nation” and “potential espionage.”

Which sort of undercuts Pierce's claim that there is a monolithic "federal bureaucracy" that is functioning just like the East German Stasi.  But still, there are as many problems with that as can be imagined.  One agency can be lenient, the next draconian.  This, I agree, is not exactly striking at the roots of the problem.  The problem is, we have 5 million Edward Snowdens.  What do we do to keep the 5 million Edward Snowdens from blowing their security oaths?   The problem is, we have a huge number of people in government employ, and they have access to the same world-wide information the rest of us do.  Whom do we blame next time we fail to catch the next Nidal Hasan before he goes berserk?  Is there to be no accountability for that?

Is Obama's response Nixonian paranoia?  (is an executive order really the equivalent of setting up the Plumbers?) Or the first clumsy attempt to get a handle on the "data revolution" we are now living with?

Have we found, again, that there are severe limits to this world we so want to create and rejoice in?  Or is that too theological a question to be legitimate?