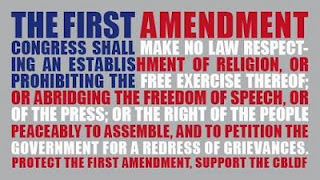 Actually, at this point, it's worthwhile for Messrs. Pierce and Fung to understand that "journalists" are not a special protected class under the First Amendment.  They aren't even defined (as medical doctors or lawyers are, or even barbers) under law:

"Who is a journalist is a question we need to ask ourselves," he said. "Is any blogger out there saying anything—do they deserve First Amendment protection? These are the issues of our times."

The verbal slipup aside (of course bloggers are covered under the Bill of Rights!), Graham's riffing on constitutional law exposes one of the age-old tensions between journalism as a product and journalism as an activity. What Graham really meant to ask was whether bloggers deserve the specific protections of the First Amendment that are granted to the press.

It's not a "verbal slipup" because Mr. Graham knows enough law (even though he's a JAG, the blogger said derisively) to know "journalists" have no special privileges under the First Amendment.  None.  Zip.  Zero.  No more than the average citizen has.

Like Mr. Pierce (although with not 1/1000th of the audience), I am a "blogger."  I don't make any money at it, but then Constitutional privilege doesn't depend on a paycheck to be activated.  Can the government suppress my writings, suspend my ability to publish, preempt my right to write?

No, no more than they can stop the New York Times.  Google, of course, might pull my plug; that's a different story.

But the "press" doesn't enjoy any special privileges, despite the fact the First Amendment specifically references the "press."  Journalists can go to jail for violating laws, for refusing to divulge sources, for committing crimes in the course of pursuing whatever they think is "journalism as an activity."  What the government is constrained from doing is barring publication of whatever a publisher, be it the NYT or a blogger on a website, has to publish.  You might still go to jail for having that information (that's what Julian Assange is so afraid of), but they can't legally prevent it from being published.

Where this notion comes from that journalists have a special privilege befuddles me as much as the idea that gun nuts have special rights to possess firearms.  If journalists were as privileged as they thought they were, they wouldn't need a shield law.  If the gun nuts were as privileged as they think they, they wouldn't need the NRA as lobbyists, they'd need them as lawyers.

After all, I don't need any enabling legislation to enjoy my right to free speech, peaceably assemble, worship as I please, be secure in my papers and possessions, enjoy a jury trial if I need one, or not be forced to testify against myself.  If journalism as an activity is specially protected just as my 4th and 5th amendment rights are, why is a shield law ever a concern?