Justice last seen racing off in a car, a paper bag containing a bottle clapped to her lips.... 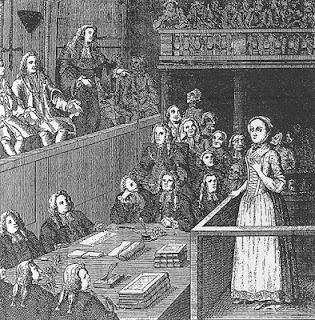 This is actually more disgusting than TPM lets on:

The complaint alleges that at a speech on Feb. 20, 2013, to lawyers at the University of Pennsylvania School of Law, [U.S. Appellate Court Judge Edith] Jones made statements that violated basic rules of judicial ethics, including the fundamental duty of impartiality.

That certain “racial groups like African Americans and Hispanics are predisposed to crime,” are “'prone' to commit acts of violence,” and get involved in more violent and “heinous” crimes than people of other ethnicities;

That Mexican nationals would prefer to be on death row in the United States rather than serving prison terms in Mexico, and it is an insult for the United States to look to the laws of other countries such as Mexico;

That Defendants' claims of racism, innocence, arbitrariness, and violations of international law and treaties are really nothing more than “red herrings” used by opponents of capital punishment;

That claims of “mental retardation” by capital defendants disgust her, and the fact such persons were convicted of a capital crime is itself sufficient to prove they are not in fact “mentally retarded”; and

That the imposition of a death sentence provides a positive service to capital-case defendants because defendants are likely to make peace with God only in the moment before their imminent execution.


When I went to school in San Antonio in the late 70's, it was still a majority/minority town (largely Hispanic/Mexican population) run by the minority (the whites).  That was slowly changing, but the presence of many military basis reinforced the Limbaughesque conservatism of the white "overclass."  I mention that because the San Antonio Express-News describes Judge Jones as:  "[a] judge who spent her formative years in San Antonio."

There are a lot of arguments for appointing judges, v. electing them.  All I can say is, that in Texas at least, judges tend to be elected by lawyers (we elect everyone from dogcatcher to governor here.  Probably we should let the dogs elect the dogcatchers....), and that works out pretty well.  Were Judge Jones to be a Texas judge at any level, these remarks would have ended her career on the bench:  Period. As it stands, she has a lifetime appointment, and while I consider these comments grounds for impeachment because she is clearly unfit to be a judge on any bench, even a Justice of the Peace, I'm not holding my breath.

But any idea that racism attitudes have faded thanks to the Civil Rights Movement or because Dr. King stood up and Rosa Parks sat down, or Barack Obama is now in the White House and not as a doorman, get pretty well kicked to the curb by comments like this.  I also find this a great deal more troubling than anything the IRS might, or might not, have done in the past few years.  After all, the Tea Party groups complaining about their tax-exempt status all got their applications approved.

How many people on Death Row are going to die because Edith Jones wants to them make peace with God?