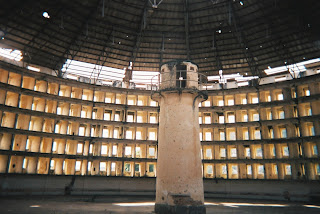 I was going to try to be insightful about this NSA mess, especially now that Snowden's secret is out (he is meat, but he's meat in Hong Kong, where he has a reasonable expectation of staying at liberty; unless China decides they'd rather turn him over to the U.S. than keep him around.)  I was going to do that, but I couldn't get away from the blatherskiting on this subject that seems to abound.

I'm willing to sacrifice all of that because I can't in good conscience allow the US government to destroy privacy, internet freedom and basic liberties for people around the world with this massive surveillance machine they're secretly building.

I just cleared 400+ e-mails out of my work account.  My wife gets that many at her office in a week (I get very few, by comparison).  Frankly, if the NSA wants to look at them, or the e-mails from my friends, or the ones that some family members forward to me, have at it.  If they have time to read every one of them, they don't have time to get up to any other kind of mischief.

Let's be clear, here.  J. Edgar Hoover used to spy on people directly.  People were followed, recording devices were planted in rooms, surveillance was carried out.  Did you ever see "The Conversation"?  The technology was flint shards and stone knives by comparison with modern equipment, but you could be convinced that nothing you did in public or private couldn't be known by someone determined to know it.

How determined is the NSA to know what I'm up to?  Seriously.

I have a friend who attended some social justice rallies in the '70s.  He told me later he was quite sure the FBI had a file on him because of it.  He was proud of it.

Panopticon?  Why don't I think so?  I know I'm supposed to think so; but I can't bring myself to do it.

And those references to Foucault?  Don't get me started on how many ways that is so completely a misreading of Foucault's thought that it's not funny.  Suffice to say Michel Foucault is not a latter-day French George Orwell.   Foucault is far more complex in his thought and interesting in his insight than that.

You see, I'm still hung on this question of privacy.  First, Google, Yahoo, Amazon, et al., have as much if not more information on me than NSA does.  Same goes for Verizon, ATT, T-Mobile, et al.  Is this not a gross invasion of my privacy?  Every online vendor knows what I've bought.  My bank knows when I've accessed my records on line.  They don't know how often I look at a printout of my statements, but they do know how long, when, and from where, I look on-line.  Have I given up my privacy to them, or should I be able to demand they not keep such records?

And despite the readers at TPM,  I really don't see how I have a privacy interest in records kept by a third party when I make use of their equipment.  I've never signed a contract with them that says such records will not be kept about how I use their system.  Honestly, if I don't want someone to read what I write as I write it, I'll buy a typewriter; or better yet, get some ink for my fountain pens.

And on the subject of that TPM reader:*

The power of these indexed, searchable and pre-mined databases is so far beyond a few earnest police searching through payphone call sheets that the analogy only serves to highlight just what is so novel and dangerous about the new system. For instance, anyone with access to it could become an instant Hoover, able to blackmail millions of Americans. But even apart from misuse — which Simon is right, we have no record of, if only because even the program itself was hidden from us before last week — the magnitude of this surveillance goes beyond what anyone in Baltimore in the 80s could have imagined.

Which would be scary, indeed, if we didn't already live in world where there are security cameras that can place us in public streets and buildings (the Boston Bombers, anyone?; or just red light cameras; I drive under them every day, and either they don't work, or they record everything; how am I to know?), and all know from movies that police can trace telephone calls, and how many of us aren't aware that the convenience of the GPS in our phones means anyone with access to the records/equipment can tell where we are, even if we aren't on our phones?

We make these trade-offs, in other words; and we make most of them in the name of convenience, and don't bat an eye that Google or Verizon might know where we are at any moment of the day or night.  And now the NSA does, too.  But does it?  The TPM reader says:

Does the computer read the data and decipher it, a la Skynet?  Or must it still be read by a human operator, a person who decides you are, or are not, interesting?  The convenience that keeps you in touch from anywhere on the globe means you can be found anywhere on the globe.  Don't like that?  Cancel your cellphone contract, because even if new laws are passed, somebody is always going to have that information.

As for the "whistleblower", pardon me if I think he's a putz.   "I don't want to live in a society that does these sort of things," he tells the Guardian; from, not his home in Hawaii, but from Hong Kong, where he might expect protection from the Chinese.  Daniel Ellsberg?  This guy isn't even Kim Philby.  He wants a clean conscience and a clean get away, and doesn't want to admit he broke any laws.  He's not a man with a conscience; he's a 29 year old yutz full of his own self-importance.

It'd be funny if it weren't so ridiculous.   But it will be worth it if we don't have to see any more silly analyses based on misreading Foucault and making silly comparisons to Bentham's Panopticon.  Especially since in the very same section (Justice) of the same website we get a story of a Federal judge who's inappropriate e-mail can now be read by one and all.  Because it's on the intertoobs, where everybody goes for the latest gossip.  And besides, if you're worried about your on-line privacy:  fuggedaboutit.  I mean, seriously:  you're more likely to have someone break your password than for the NSA to start following you around a la "Enemy of the State."

I mean, after Will Smith's last movie, nobody wants to know what he's doing next, amirite?

*I also think David Simon's post on the subject is far more intelligent than either of the negative responses TPM posted from its readers.