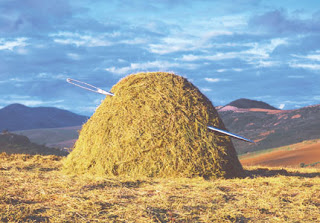 As I've said, the real issue with the NSA revelations is not that the government is spying on the whole world (surprise!), but the theory all that spying is based on:


Supporters of the sweeping U.S. surveillance effort say it's needed to build a haystack of information in which to find a needle that will stop a terrorist. In Headley's case, however, it appears the U.S. was handed the needle first — and then deployed surveillance that led to the arrest and prosecution of Headley and other plotters.

Honestly, even one case, if it could be proven to have all the necessary causal links, wouldn't prove the validity of the theory.  The whole idea of this massive data gathering is still just magical thinking:  if we amass enough data and run it through enough algorithms, the computer will do the work for us and, voila!, captured terrorists!

Except, not, for a whole host of easily identifiable reasons.  This flawed premise is the basis of national security policy; at least, a very expensive, very clandestine (or it was, anyway) policy.  And the fact that it hasn't worked yet just means, as usual, that we just haven't tried hard enough; or amassed enough data; or run it all through enough algorithms.

But we never escape the basic issue of epistemology (where is a philosopher when you need one?):  you only find what you are looking for.  Computers only make that process faster; they don't make it magically different.