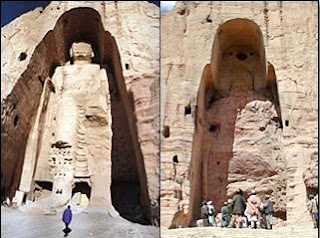 I agree we shouldn't be involved in Syria.  It's a bit like Rwanda, in that slaughter is happening, it's a humanitarian crisis, and we shouldn't ignore it.  It's a bit like Bosnia; no matter what we do, the result will be a mess.  And it could be like Iraq or Afghanistan, except I don't think we'll get that involved.

So there is not a good answer.  And none of these are good answers, either:

“It was a matter of time — the White House may not have wanted intervention but intervention itself was chasing the administration,” said Emile Hokayem, a Middle East-based analyst with the International Institute for Strategic Studies. “The White House underestimated the potency of this struggle and its profound implications for the region and its own interests, and then found itself lacking space, strategic clarity and momentum to do anything meaningful.”

That presumes we ever had space, strategic clarity, and momentum to do anything meaningful.  It's nice to think we did, but that strikes me as the same reasoning leading the NSA to get its hands on all the information in the world; even Faustus didn't understand everything after his deal with Mepistopheles.  And intervention was chasing us? Why?  Because we have a standing army?  Should we, perhaps, start to reconsider that 50 year old commitment?

While an aide said Mr. Obama’s decision was made even before Mr. Clinton’s comments this week endorsing more robust intervention, the president ended up satisfying neither side in the Syrian debate. For those who have pressed the White House to do more, the belated agreement to send small arms after nearly 93,000 deaths seems too little, too late. For those who warn that Syria could become another Iraq or Libya, the latest move comes across as another step down a slippery slope toward a messy outcome.

Clinton wants to rewrite the history of Rwanda.  And the question not being answered here, but being worried about by the critics, is:  what do we do if the regime falls?  Libya is not exactly a Western democracy, nor is it likely to be one anytime soon.  Do we expect Syria to stabilize within six months, and recover all it's refugees, and bring prosperity to the region?

Anne-Marie Slaughter, a former director of policy planning in Mr. Obama’s State Department, said her onetime boss so clearly wanted to be a domestic president and yet could not remain at a distance from the Syria conflict because it could set the Middle East in flames. Already, she noted, it has helped destabilize Iraq, Lebanon and Turkey and flooded refugees into Jordan.

“I really worry this is going to be remembered as the United States standing by and watching a Middle East war ignite,” said Ms. Slaughter, who will become president of the New America Foundation in Washington in September. “I fear the president thinks he can stand apart. He’s the one who always says with power comes responsibility. That’s his line.”

Responsibility to whom, though?  The people of Iraq, Lebanon, and Turkey?  Or the people of America, which includes all U.S. soldiers?

But White House aides on Friday again ruled out sending United States troops and dismissed calls for a no-fly zone over Syria, calling it “dramatically more difficult and dangerous and costly” than it had been in Libya in 2011, as Mr. Rhodes put it. And there is little domestic constituency for another American adventure abroad.


Zbigniew Brzezinski, who was President Jimmy Carter’s national security adviser, said he was “baffled” by Mr. Obama’s decision to become more deeply involved. “What exactly is our objective?” he asked. “It’s not clear to me that every nondemocratic government in the world has to be removed by force.”

The Syria war is a struggle for power, not democracy, he said. “Is that something we should be engaged in?”

Again:  yup.  The struggle between Communism and democracy which was the "Cold War" (or was supposed to be) is long over.  The peoples of the world are not struggling to decide to fall under the sphere of influence of the U.S. or the U.S.S.R., and we really don't have a dog in this fight.  Saudi Arabia is a very repressive regime.  Should we be working to destabilize them, or at least support opponents of the kingdom?  Obviously not, but why, then, do we have an interest in Syria?  Because the regime is falling already?  Because people have died?  Because of refugees?  Because our support of rebels in Afghanistan at the end of the Cold War worked out so well for peace, stability, and humanitarian interests?
Posted by Rmj at 10:03 AM