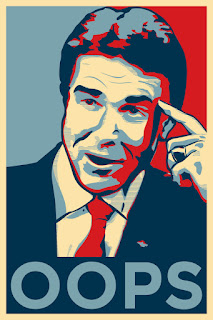 The odd thing is, I actually agree with Perry:


In fact, even the woman who filibustered the Senate the other day was born into difficult circumstances. She was the daughter of as single woman, she was a teenage mother herself. She managed to eventually graduate from Harvard Law School and serve in the Texas senate. It is just unfortunate that she hasn't learned from her own example that every life must be given a chance to realize its full potential and that every life matters.

I just don't think these statements lead to his conclusion.

I agree that life must be given a chance to realize its full potential, and that every life matters.  But when that creates a crossroads between two lives, where one must be literally enslaved to the other (the fetus cannot live without the woman, but the woman can live without the fetus), who determines the resolution?  The state?

So which life matters more, is the issue.  And that question is an entirely moral one.  It is not a question of law, it is a question of choice.  It is a determination made by the pregnant woman, and no one else.  How can she choose the way I think best, when the outcome of the decision does not affect me?  Why does the state get to weigh in, outside the standards set by Roe and Casey?  The standards of Roe and Casey are legal standards, and the state is a creature of laws.  The morality of the question, the rightness of her decision, is not a legal question. It is not a legal question within the first 20 weeks of pregnancy, anyway.

So Perry is right; every life matters. But Perry is wrong; especially since he clearly thinks rich lives matter much more than poor ones.  And what really matters to him are his political ambitions:

This is not about money — if it were, Texas would be taking it. This is about Obamacare. It's widely believed in Austin that Perry is seriously considering another run for president — this time without the "oops."  His base is Tea Party Republicans across the country. While it might cost $100 billion for the privilege, Perry is going to be able to stand in front of them and say, "I said no to Obama when he tried to bribe my state with health care coverage for the poor."

A "privilege," we should note, that's not costing him a thin dime. And in the world of outrages, this is the real outrage; what he said about Sen. Davis is just proof the man can't stand to reason to save his life. His venality, his selfish arrogance, is what truly "tarnishes the high office he holds."