As if the label "Me Generation" wasn't iron-clad evidence enough 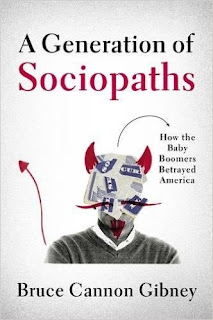 We know that when people were born is important, and determines inalterably what those people will grow up to act like.

We know this because we used to see it (long, long ago) on paper placemats in Chinese restaurants, where we are told the year of our birth relates us to an animal, and to absolutely everyone else born that year, or in some other year much later.

We know this because the astrology column in newspapers (longer ago than the placemats) told us what our day would be like, based on our date of birth in the calendar year (and the stars and planets, apparently), no matter what year we were born.  And our date of birth told us what personality traits we would have, whether we wanted them or not.

We know this because we invented the category of "generations" for the "Baby boom generation."  Which required us to carry those categories forward (everybody deserves a category!) and then backward (the WWII "generation" was the "Builders" until Tom Brokaw decided they were the "Greatest") to about WWI.  People before that were not "generations," they were just dead, because they were nobody's grandparents or great-grandparents, except in name only (not in living memory).

And now this nonsense leads someone to call at least 70 million people born between the entirely scientific and well-established by irrefutable reasoning years of 1946-1964 (or is it simply 18 years and the neat inversion of numbers that appeals?) to be sociopaths.  Because "Me Generation," why else?  (Besides, 18 years is a "generation," because:  Webster's.  Why else?)

Which cannot include people born in 1945, or in 1965, because that would be silly.  Consult your Chinese restaurant placemat for why.