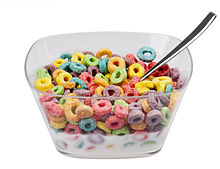 When my daughter traveled to China, part of the visit involved a stay with a family in rural China.  One of her strongest memories of that stay was that breakfast was not a meal with special dishes allotted to it.  What the family ate for dinner the night before, or for lunch that day, they also ate for breakfast.

We have pancakes, and eggs, and sausage and biscuits; but truth be told we eat any of those foods any time of day.  Pancakes at night is a bit unusual, except for Shrove Tuesday, or when you go to a diner serving pancakes and they smell so good.  But cereal?  Except for Sunday night when the home cook is "off" and the kitchen is "closed," who wants to eat cereal for any meal but breakfast?  And why is that?  Probably because of Post and General Mills and the need to sell product in forms other than bread and cornmeal.

"The average North American uses five times as much grain per person yearly as does one of the two billion persons living in poor countries.  We must about 2000 pounds each.  All but 150 pounds of this we consume indirectly in meat, eggs and alcoholic beverages.  But the poor Asian eats less than 400 pounds a year, most of it directly as rice or wheat.  It may surprise us to realize that in Europe, where many of us have our roots and where people generally enjoy an adequate diet, each person consumes about 1000 pounds of grain a year, half of what a North American eats."

"The fasts before Easter will be found to be differently observed among different people.  Some wholly abstain from things that have life; others feed on fish only of all the living creatures; many, together with fish, eat fowl also, saying that according to Moses these were likewise made out of the waters.  Some abstain from eggs; others partake of dry bread alone; while others, having fasted till the ninth hour, afterwards take any sort of food without distinction."