Ghost in a nutshell 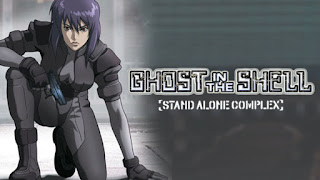 The real point of "Ghost in the Shell," the point lost entirely in the live action movie (this is my strongest critique of the movie, frankly), is the idea of the Cartesian split that can be created by technology.

In the universe of the movies, all humans (or a heckuva lot of them) can access "cyberspace" without logging on via a computer terminal or putting on VR goggles (again, don't worry about how they do that, but it is a technological matter).  "Cyberspace" is the right term here, that being the term William Gibson coined to talk about electronic communications via computers that human beings could directly experience.  The idea clearly bled over into GITS (unfortunate acronym!).  In the anime movies, characters are always communicating with each other in cyberspace, or accessing data, or hacking computer systems there, etc., etc.  It's clearly a visual referent for a visual media, but it works extremely well.  It also underscores the idea that the "ghost in the shell" is not the cyborg Major, but humanity in general, for which is more "real":  cyberspace, or "meatspace"?  The former, in many plot lines, allows great control over "the real world," and most of the action of the plots (not in the ScarJo movie, sadly) is pushed forward by data mining and other actions in cyberspace.

The Major serves as a concrete reference to this issue, as she lives wholly in a cybernetic body, transferring her consciousness (or her brain?) from body to body as she upgrades or has to replace it (ScarJo just gets repairs).  But all the characters in the movies live in both spaces:  communicating with each other via what would be telepathy, if it weren't internet assisted Skype of a sort, or just VOIP when there's no visual.   They think their thoughts and it is received as speech by other characters.  Characters meet clandestinely in cyberspace, the equivalent (sort of) to the "dark web."  Characters, especially bad guys, manipulate control in cyberspace (again, the live action version missed a chance to put this on screen).  There are two distinct realities:  the reality of the solid world where taking over traffic control screws up traffic (from the latest movie), and the reality of cyberspace (a reality never truly exploited in the live-action movie).  In fact, cyberspace, like mind, is the ultimate reality:  it is the reality that controls the "real world."

In other words, it's the Cartesian split:  the reality of the flesh, and the reality of mind, and the latter is in control of the former.  Descartes had the split foisted on him by Christianity and Platonism; he did the best he could with it through his cogito, which put the emphasis on mind and relegated body to a machine (hence the derisive term meant to dismiss Cartesianism, the "ghost in the machine").*  The philosophical critique intended is to point out how absurd it is for the "ghost" to interact with the "machine," but now that computer hardware needs computer software to function (and one is useless without the other), that critique doesn't seem quite so strong (it made more sense when machines were merely mechanical).  But if the fictional concept of cyberspace could become a reality, would we be human in both spaces?  Or more human in one than the other?

We have an inkling now, where the internet has replaced conversation and interpersonal interaction with, well, words.  Video blogs never really got anywhere; podcasts are popular, but those are just words without faces.  Words as text, like you are reading now, are more anonymous still.  Is this the "real" me, writing these words to you?  I am well aware, after years of writing letters to friends, that what I sound like in print, especially in personal correspondence, is not at all what I sound like in person; and I don't mean the timbre of my voice.  Am I more or less me, here?  Are you reading my thoughts?  Or are you reading my thoughts as translated through my fingers, as structured into sentences and paragraphs?  This is not the way I talk to my daughter, my wife, my friends.  This isn't even necessarily the way I write letters to family and friends.

But we are taking this as reality.  "Fake News" is really only fully possible as an internet construct.  It is news that was marginalized before the internet.  There was gossip; there were pamphlets, there were rumors and tabloids; and only now is any of that "real" because of social media, a term that exclusively means the internet, a place where anything can be said, and will be.  And where lies are given as much validity by some, as the "newspaper of record" once was by what seemed to be most of us.

We don't have to keep waiting for the future. Like the basilea tou theou,  it's here.  The question is:  do we see it?  And if we do, what do we do with it?

*which was more extreme than Plato or Christianity ever meant to go.