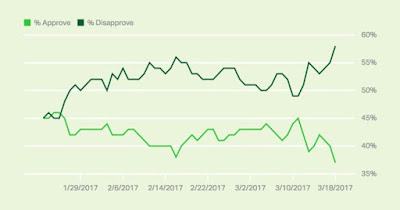 How does a President with a -21% approval rating function at all?

Josh Marshall thinks this is due to the ACA repeal effort, and Trump's inability to move that bill forward.  I would add to that:  Russia; Trump's tweets about wiretapping (and the subsequent insanity of Trump's administration trying to defend that nonsense, which, yes, is the "bigger picture", and I think more people than not at least have the sense that something is rotten in the state of Denmark); and related to that, the unforced diplomatic error of insulting Britain (with Trump blaming that on Fox News*), along with the embarrassing visit and public treatment of Angela Merkel (whom Trump, in his sheer ignorance, has also insulted), and Sean Spicer forced to defend the President by citing false news stories and relying on the "fake news" outlets Trump decries as liars.  It is, as Adam Schiff said, a "wrecking ball" to U.S. allies.

Of course, JMM's simpler answer is attractive.  I mean, when even Tom Cotton and Ted Cruz agree the AHCA is a dead letter before it hits the House floor, and the White House is admitting universal health care coverage is not even an option without Obamacare, it may be surprising Trump's approval rating is as high as it is.**

*and to prove irony is not dead:

**And then there's Rep. Will Hurd (R-Tex), who thinks Trump should apologize to Obama and Britain and Germany.  Maybe this is what a -21% approval rating looks like.