Of Meat and Men 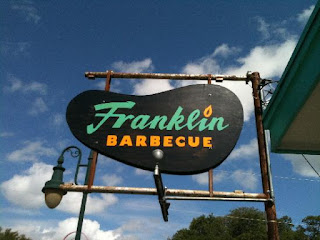 Nope; never been there, not planning to go there.  I'm sure it's good,
but I'm not making a four hour drive to Austin to get up early the next day
and spend all morning waiting for a plate of BBQ.
I know places where the wait is shorter and the meal just as good.

My favorite BBQ place as a kid was a place somewhere between Dallas and Tyler, on the old highway before I-20 was the way to get to Dallas (or maybe I-20 was there, and we just liked the alternative once in a while.  I was a kid; what did I know?).  It was a room covered in iron objects:  farm implements and household tools long since replaced by electronics and 'technology.'  It was as much an "antique" store as BBQ place.  It wasn't a "restaurant."  BBQ wasn't served in "restaurants."

And the place smelled like the inside of a pit smoker.  It was stained with smoke, because there was no separation of the pit and the dining room.  There's a place kind of like it, still, in Luling, just south of Lockhart.  The pit is in the center of the room, in a separate room; you go in there to order, to soak up the smell of the pit before you sit down to eat.  This place was all pit.

And it never had a line out the door.  Nobody arrived hours before opening time and waited anxiously in hopes the meat didn't run out.  This place kept regular hours, and served regular customers as they arrived; or people like us, travelers from point A to point B, who disdained the interstate for "local color" (as we would call it now).

Now people think standing in line for BBQ means it's a great meal.  But it's still BBQ.  In Texas that means brisket (didn't even know that until a few years ago; just knew it was beef, not pork.  BBQ chicken meant grilled chicken cooked with bottled sauce poured on it while it cooked.  But really BBQ was beef.), served with sides like potato salad and pinto beans and white bread (preferably from a plastic bag, not homemade).  It is not gourmet dining.

In fact, there's a BBQ place near me, and the guy who runs it opened a new steak place, just to show off his Cordon Bleu chops (he has the training!).  His BBQ is widely praised (people stand in line for it), but he said he wanted to show he could cook really good food.  Not just, in other words, BBQ.

BBQ is good food. It's comfort food. That doesn't mean it's really good food, though.  Cordon Bleu level cooking is probably worth making a reservation for.  BBQ isn't.  It was never meant to be.

There's something un-Texan about swooning over BBQ.  After all, the commercial iteration of it started in stores in Central Texas, where the store owner threw extra meat on the grill to smoke (so it would be tender, and so it would cook by itself), and sold it at lunch time for an easy sandwich that was hot and tasty.  But Texas BBQ is like Texas chicken-fried steak:  it takes a tough piece of meat and renders it edible.  Chicken-fried steak comes from wienerschnitzel (strong German heritage in Central Texas), but it doesn't use veal; you'd ruin veal to make it chicken-fried (a restaurant in Austin actually tried it once.  Clearly they were Yankees thinking to bring some "class" to Texas comfort food.  Clearly, too, they had lost their way.  That restaurant is long gone.).  BBQ is the same way; good for what it cooks, but haute cuisine it ain't.

This is not to say I don't like BBQ.  I've been known to drive 4 hours one way to get to my favorite BBQ restaurant (bad BBQ, which is all around me, isn't worth spitting on).  So I shouldn't disdain people who stand in line for four hours, I suppose.  But I like driving; I don't like standing in line.  Besides, Texans have driven long distances for a good meal since we had cars.  Standing in line sounds like something they do in New York City.

So what did I do yesterday?  Drove an hour to a BBQ restaurant, then waited outside in line for an hour.  The wait was marketing.  The restaurant cleverly set the serving line (like almost any BBQ joint I've ever been to, it had a serving line) just inside the door.  The dining room was 1/4 full; there were more people outside than in.  But you had to stand outside until getting in, then stand and wait until the server could cut and load your plate (cafeteria style), and then pay and sit down.  The line indicated, not massive and unfillable demand, but rather like a Trump rally, an effort to provide a good street view (and it is on a busy street).  It was good food, worth the wait (although the wait was, as I say, imposed by the management), but it was still BBQ.

There is good BBQ, and there is bad BBQ.  The good stuff takes some skill to cook, but it's not Michelin class skills; not even Cordon Bleu or CIA (Culinary Institute, not the spies) level skill.  Bad BBQ is poorly cooked meat drowned in bad sauce.  Good BBQ is worth traveling for and waiting for, but like good chicken fried steak, it can't really be raised above its level.  Good BBQ is brisket; it's sausage; it's ribs; it's even turkey (which has replaced chicken) (and it can be pork; some of the best BBQ I ever had in Central Texas was pork.  It was a BBQ revelation; but it was still just BBQ).  But honestly, it doesn't raise those ingredients the way even good Cajun food does.  It's BBQ.

The resurgence of BBQ in Texas is a good thing.  Good BBQ is always to be welcomed, and for awhile good BBQ was almost a ghost of my childhood.  As long as it never becomes the next cronut, or starts being served by soup nazis, we'll be fine.