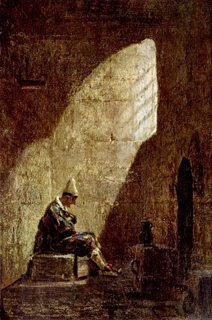 IS this a fast, to keep
The larder lean?
And clean
From fat of veals and sheep?

To show a heart grief-rent;
To starve thy sin,
Not bin;
And that’s to keep thy Lent.

"Let us fast in such a way that we lavish our lunches upon the poor, so that we may not store up in our purses what we intended to eat, but rather in the stomachs of the poor."--Caesarius of Arles, Sixth century

I post these things to try to remind myself it is Lent; and of some of the importance of Lent.  Lent is really the great season of the church, and long season,  the season of repentance and reflection on sin, the season of confession and atonement.  I'm surprised it wasn't taken up at some point by the Protestants, especially those sects that wanted to be more Calvinist than the Calvinists, who wanted to repent like the Baptisers at every revival.  Then again, Lent is an institutional method, and Protestants have long emphasized personal piety as a way to reject organizational spirituality.

So it goes; and so it is.  I find Lent useful as a method of self-examination, as long as the examination is honest and fruitful, not light and passing or degrading and demeaning.  We are not called to regret our every sin, but neither are we called to treat them as peccadilloes.

I really need to work on my ability to fast; but maybe if I can't physically fast, I can at least fast from those habits of the heart that keep my bowels from being filled with mercy and compassion; and really, until that sentence, it's easy to forget the following wasn't written yesterday: