"Co-ed head; enter at your own risk" 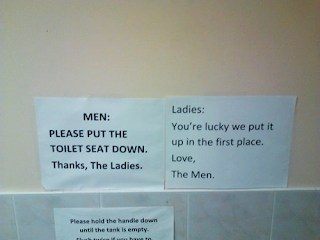 I wonder about the French.

I've been binge-watching on Netflix, a bad habit at my age.  Trouble is, so many TV shows on Netflix are so interesting, if only because they aren't American.  No, this is not reverse snobbery about the "superiority" of Europe over the Colonies; but foreign shows are fascinating because they are a window (albeit a fictional one) into other lands.  Take this example:

The show in question is "Spiral," a police procedural that focusses on the French police (a small cadre) and French lawyers and judges.  The French have a decidedly non-Anglo-Saxon (that's how they identify what they don't want to emulate) legal system, with investigating judges who interview witnesses and oversee police investigations and otherwise decide who is going to be charged and with what crime.  No, it's cool; a completely separate set of judges try the cases; but all the judges ask questions and run the investigations or trials, completely contrary to the American system where judges run the courtroom only (even the judges in "Rumpole" are more active than American judges are allowed to be), and trials are conducted by the lawyers (a system one character, a judge, denounces as class-based, since the quality of the trial and the legal defense depends on ability to pay.  It's not a perfect critique, but he has a point.).

But that's beside the point.  Along about season 3, I began to notice the police, a squad led by a woman and including other female officers, were in and out of the same bathroom all the time (looked the same, anyway).  Men walked in on the captain of their squad, she walked in on them; never in compromising positions, mind.  Everybody was always at the sinks.  But nobody raised an eyebrow.  Nobody said "What are you doing in here?"  I even expected it, the first time; by the third time I realized:  this is normal in France.

And in this country, we fear that men will enter ladies' restrooms and, if not assault them there (in the least private place for an assault imaginable), will at least "invade their privacy."  At least the Texas Senate fears it.

Not that I'm advocating for unisex bathrooms; but honestly, this is a cultural matter, not a physiological or even criminal one.  It's just kind of funny to see how casual the French are about it.

Or mature.  I still think Garrison Keillor was right, that the French are the most mature people on the planet.  About some things, anyway.