The Commander-in-Chief Washes His Hands in Public 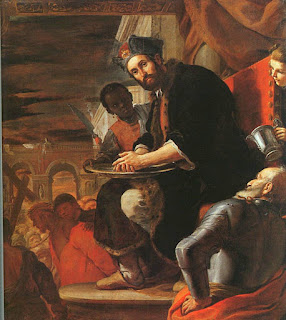 “This [the intelligence gathering raid in Yemen] was a mission that was started before I got here. This was something they wanted to do,” he said. “They came to me, they explained what they wanted to do ― the generals ― who are very respected, my generals are the most respected that we’ve had in many decades, I believe. And they lost Ryan.

“I can understand people saying that. I’d feel ― ‘What’s worse?’ There’s nothing worse,” he added. “This was something that they were looking at for a long time doing, and according to [Defense Secretary Jim] Mattis it was a very successful mission. They got tremendous amounts of information.”

As everyone knows by now, no, they didn't.  And then there was this surreal scene at the Not-The-State-of-the-Union address:

We are blessed to be joined tonight by Carryn Owens, the widow of a U.S. Navy Special Operator Senior Chief William “Ryan” Owens. Ryan died as he lived: a warrior, and a hero—battling against terrorism and securing our nation.

I just spoke to our great Gen. Mattis just now, who reconfirmed that, and I quote, “Ryan was a part of a highly successful raid that generated large amounts of vital intelligence that will lead to many more victories in the future against our enemies.” Ryan’s legacy is etched into eternity. Thank you.

And Ryan is looking down right now, you know that, and he’s very happy because I think he just broke a record. For as the Bible teaches us, there is no greater act of love than to lay down one’s life for one’s friends. Ryan laid down his life for his friends, for his country, and for our freedom—we will never forget Ryan.

The very long applause for the crying Carryn Owens was moving—and led Trump to ad-lib this weird line, referring to the extended clapping:

Ryan is looking down right now, you know that, and he is very happy because I think he just broke a record.


As Michelle Goldberg put it:  "In other words, Owens’ death had a happy ending because a lot of people clapped at Trump’s big speech."

Trump washed his hands in the widow's tears and then took credit for the standing ovation.