Tuesday of the Third Week of Lent-2017 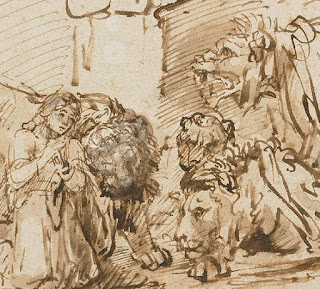 The presidents and satraps conspired and came to the king and said to him, "O King Darius, live forever!  All the presidents of the kingdom, the prefects and the satraps, the counselors and the governors are agreed that they kind should establish an ordinance and enforce an interdict, that whoever prays to anyone, divine or human, for thirty days, except to you, O king, shall be thrown into a den of lions.  Now, O king, establish the interdict and sign the document, so that it cannot be changed, according to the law of the Medes and the Persians, which cannot be revoked."  Therefore King Darius signed the document and interdict.

Although Daniel knew that the document had been signed, he continued to go to his house, which had windows in its upper room open toward Jerusalem, and to get down on his knees three times a day to pray to his God and praise God, just as he had done previously.  The conspirators came and found Daniel praying and seeking mercy before his God.  Then they approached the king and said concerning the interdict, "O king!  Did you not sign an interdict, that anyone who prays to anyone, divine or human, within thirty days except to you, O king, shall be thrown into a den of lions?"  The king answered, "The thing stands fast, according to the law of the Medes and Persians, which cannot be revoked."  Then they responded to the king, "Daniel, one of the exiles from Judah, pays no attention to you, O king, or to the interdict you have signed, but he is saying his prayers three times a day."

When the king heard the charge, he was very much distressed.  He was determined to save Daniel, and until the sun went down he made every effort to rescue him.  Then the conspirators came to the king and said to him, "Know, O king, that it is a law of the Medes and the Persians that no interdict or ordinance that the king establishes can be changed."

Then the king gave the command, and Daniel was brought and thrown into the den of lions.  The king said to Daniel, "May your God, whom you faithfully serve, deliver you!"  A stone was brought and laid on the mouth of the den, and the king sealed it with his own signet and with the signet of his lords, so that nothing might be changed concerning Daniel.  Then the king went to his palace and spent the night fasting; no food was brought to him, and sleep fled from him.

Karl Barth is supposed to have advised preachers to hold the Bible in one hand, and the newspaper in the other.  I read this story from Daniel, especially about the prayer three times a day, and the interdiction of such prayer, and I can't help but think of the Texas Attorney General.  He declared, in an open letter, that Liberty High School in Frisco, Texas, had a designated prayer room open only to Muslim students, a preferential treatment of a religion that violated the law.  The problem is, the room is open to all students who want to pray, and is used by different groups of students for prayer in the course of the day.  Nor is the prayer by Muslims, who pray at least three times a day, a problem for the students.  As one recent graduate said:  “As a believer in Christ, I want my faith respected,” he said. “If I want that respect, if we want respect as people, then we need to show respect.”

But Ken Paxton would rather be a satrap and a conspirator.

No longer does prayer bring an angel of dew to the heart or a fiery furnace, or close up the mouths of lions, or transport to the hungry food from the fields.  No longer does it remove all sense of pain by the grace it wins for others.  But it gives the armor of patience to those who suffer, who fell pain, who are distressed.  It strengthens the power of grace, so that faith may know what it is gaining from the Lord and understand what it is suffering for the name of God.

As if things have changed since the days of the Exile; or, for that matter, the third century.

Thus it was that when Daniel was shut in the lion-pit by the king's orders. God sent him his dinner, and the hungry beasts left the man of God alone and let him take his food.  So, too, Elias was fed on his flight, in his seclusion and in time of persecution; he was served by ravens, his food brought to him by birds.  Yes, wild beasts can keep their distance, birds can wait at table, but the human will is so horribly cruel that people are always on the prowl, always ready to pounce on their prey.

The coda to the Paxton story is that he went on FoxNews, despite being rebuked by the school for having no more facts for his story than Donald Trump has for his stories, and continued to make his false claim.  As if humans are so much different now than they were 1800 years ago.  The comfort and hope is that God is no different, either.