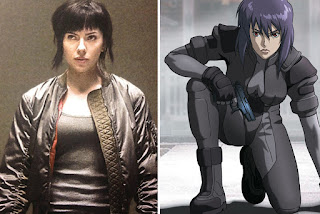 Okay, in this case purple hair and hazel eyes.  Clearly characteristics of the Japanese, eh?
But Ms. Johansson certainly has that chin.

Took in a preview of the live action "Ghost in the Shell" movie last night.  I'm a fan of the anime, especially "Stand Alone Complex," which I used to stay up late for on Adult Swim (thim was the days!).  Discussed the whole "cultural appropriation" controversy on my way back with my daughter.

First, I have to say Ms. Johansson manages, somehow, to have the heart-shaped face and almost triangular chin of the Major from anime (an almost cliche of anime). Oddly, she has jet-black hair, not the Major's shade of blue (my daughter pointed out she had blue highlights, which I noticed and wondered about.).  But if you watch the anime, the team consists of Asians and Westerners.  One character has a full beard, and looks more like he belongs in the Pacific Northwest in a flannel shirt with an axe on his shoulder.  Many characters in the film are not distinctly Asian, and in the series of films it turns out the Major has been a cyborg since birth.  There are photos of her looking like she does as an adult, except in miniature (fakes, as it turns out; but still, how many Asian women look like an anime figure with blue hair?).

So it's more than a little weird to get all upset that the star of the show is not Asian.  Indeed, it seemed the purpose of the original 1995 movie was to show a multi-national, if not wholly multicultural, Japan; a Japan altered in the future from the Japan of the present, but in some ways just an extension of that culture, too.  It was never clear the Major was Asian; it was more clear she was a cyborg with an impressive (but also strangely sexless) physique.

As I said to my daughter during the opening sequence where the "Major" is rescued and made a cyborg (her brain in a robot body; don't think about it too hard), "And make her look like Scarlett Johansson because, why not?"  Later, the Major meets her mother, a lovely little Asian woman who apparently always welcomes perfect strangers in for tea (again, don't think about it....).  But the bad guys (spoiler alert!) are Americans, or at least Westerners, and Juliette Binoche barely covers her French accent as the doctor who makes the cyborg live.  Which, I guess, explains why the cyborg looks like ScarJo and not Lucy Liu.

No matter, never mind; because the movie makes way too much of that title, itself a derisive slur against Cartesianism which became, as irony often has it, the definition of Cartesianism (well, to those not in the know).  And speaking of not being in the know:

A few weeks later in an interview with Marie Claire, Johansson commented on the “Ghost in the Shell” whitewashing controversy. When asked whether she felt the charge of whitewashing with regard to her playing a Japanese character was fair, she answered, “I certainly would never presume to play another race of a person. Diversity is important in Hollywood, and I would never want to feel like I was playing a character that was offensive.”

And then she pivoted: “Also, having a franchise with a female protagonist driving it is such a rare opportunity. Certainly, I feel the enormous pressure of that — the weight of such a big property on my shoulders.”

That’s some A-list level evading of the point. Because guess what’s even rarer than a white woman leading an action film? An Asian woman or a woman of color leading any kind of film.

No, that's some A-Level racesplaining (you read it here first!)  In the original anime the "Major" is a Japanese cyborg in the same sense that a Toyota is a Japanese car.   Should Hollywood be more "woke" and put an Asian lead in this film?  Considering how much money is on the screen, I don't see that film getting backed for production in Hollywood.  It's a pretty standard Hollywood action film, and yes I do think they do that kind of thing better in Japan and Korea and elsewhere (or they did, I don't keep up with the cutting edge), but that kind of film is going to get made with a very famous star at the helm, probably white.  Do I like that as a concept?  No.  Do I understand it as a  reality?  Yes.  Would Ms. Johansson turning down the film have made any difference to the film being made with another white woman in the lead?  No.

And, the truth is, she doesn't play another race (and "race" is not a mind concept, according to this movie.  That is, it isn't a fundamental issue of identity.  If some people think about that too long, the conversation could get REALLY heated.).  The truth also is:  women keep acting (Meryl Streep is the exception that proves the rule) when they can become action figures (Ms. Johannson is a classic case; Anne Hathaway is doing it more and more; Sigourney Weaver did nothing but action roles for a long time).  Think of how many actresses have vanished from the screen after a few movies; because they didn't become action figures, and didn't stay perpetually 19 (at least on screen).  There are larger problems with Hollywood casting here.

And then there's the American take on the film, which doesn't redound to its credit.  This film doesn't have the sensibility of the original anime.  It's not as bad as the American version of The Great British Baking Show, which was so bad it disappeared without a trace; but the flaw is the same.  Some stories come out of a particular culture (and British Baking is a story as much as any reality show is), and do best there.  "Ghost in the Shell" is a good movie, which doesn't sully the anime with its presence.  Doesn't replace the anime either; but since the films already exist, a live action version has to stand on its own, and alongside.

And snide remarks about the lead actress don't really reflect on her, or the movie, or the issue of diversity in Hollywood; at least not in a way that's really helping.

In a new iteration, blue hair and blue eyes; which I suppose is distinctly Japanese....