We interrupt this news story 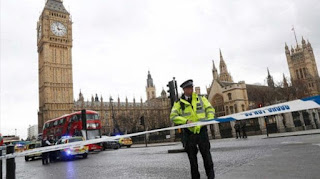 to bring you something truly terrifying.

I'm not even going to copy a word of it; it's short enough, read the original.  More than a few comments there, however, agree with the actions of the NYPD, which according to comments was protecting only the British consulate in the city, and Grand Central Station (because:  reasons).

Except that's not what the article linked in the Salon post says:

The NYPD says it has deployed additional counterterrorism resources across the city out of an abundance of caution.

They say there no threats to the city at this time.

The White House says President Donald Trump has been briefed on the incident.

The Department of Homeland Security also released a statement saying they are in contact with British authorities, adding "At this time our domestic security posture remains unchanged.  However, our frontline officers and agents continue to stay vigilant in safeguarding the American people and our homeland."

So, okay, "abundance of caution" is fine.  But a guy who drives up from Maryland looking for a black to kill because "they get romantically involved with white women," is not a cause of fear and loathing.  An assault in London with a knife and a car, is.

Which answers the question posted at Slate:  "Does this make sense?" Of course it does.  White people are never scary!*

*Which, yes, assumes the attacker in London was non-white, a fact not yet in evidence.  But "terrorism," ya know?  I mean, attacking a black man in New York City "because it is the media capital of the world and he wanted to make a statement" is just not terrorism, clearly.  I mean, he's a white guy.