Saturday of the First Week of Lent-2017 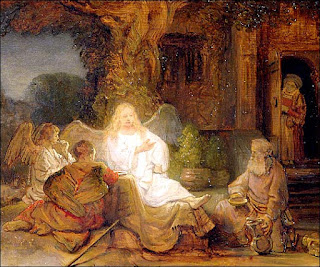 Then the Lord said, “How great is the outcry against Sodom and Gomorrah and how very grave their sin! 21 I must go down and see whether they have done altogether according to the outcry that has come to me; and if not, I will know.”

Incline us, O God, to think humbly of ourselves, to be saved only in the examination of our own conduct, to consider our fellow creatures with kindness, and to judge of all they say and do with the charity which we would desire from them ourselves.

God has just told Abraham for the third time that he will have a son, even though he's too old and Sarah is too old.  Sarah laughs with joy at the thought, even as she doubts it could happen, and when God tells her she has laughed she denies it, but God says:  "You did laugh."

And then God tells Abraham about Sodom and Gomorrah; their sin is not what we think it is, though. It is inhospitality.  But that's Genesis 19; this is Genesis 18, and Abraham bargains with God.

God's grace is infinite, but so also is God's justice, and one does not negate the other.

"Do not be so confident of forgiveness that you add sin to sin."  Sirach 5:5

Then again, for the sake of 10, God promised not to destroy Sodom and Gomorrah; so where were the 10?  The question is a Biblical one, too:  "Is it I, Lord?"