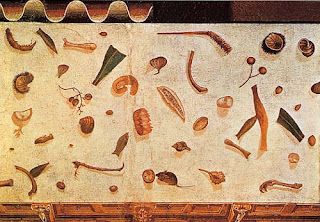 One dies in full prosperity,
being wholly at ease and secure,
his loins full of milk
and the marrow of his bones moist.

Another dies in bitterness of soul,
never having tasted of good.
They lie down alike in the dust,
and the worms cover them.

Do not be afraid when some become rich,
when the wealth of their houses increases
For when they die they will carry nothing away;
their wealth will not go down after them.
Though in their lifetimes they count themselves happy
--for you are praised when you do well for yourself--
they will go to the company of their ancestors;
who will never again see the light.

Oh, to whom shall I make my moan
For to go with me in that heavy journey?
First Fellowship said he would with me gone;
His words were very pleasant and gay,
But afterward he left me alone.
Then spake I to my kinfolk, all in despair,
And also they gave me words fair;
They lacked no fair speaking,
But all forsook me in the ending.
That went I to my Goods, that I loved best,
In hope to have comfort, but there had I least;
For my Goods sharply did me tell
That he bringeth many into hell.
Then of myself I was ashamed,
And so I am worthy to be blamed;
Thus may I well myself hate.
Of whom shall I now counsel take?
I think that I shall ever speed
Till that I go to my Good Deeds.
But, alas, she is so weak
That she can neither go nor speak;
Yet will I venture on her now.
My Good Deeds, where be you?

Death is the ultimate liminal experience, the final frontier we all cross but from which no traveler returns.  We are all about our boundaries, about who we are and are not, and so we fear the other:  the homosexual, the black, the Latino, the Asian, the poor, the rich, transgendered, educated, foolish, wise, ignorant.  We fear the contagion of the other, we fear becoming what we think we are not, and most of all we fear death, the becoming of what none of us are:  not alive.  We fear it so much it has become the standard rebuttal of religious belief:  that all religions arose from a fear of death, from a denial of the ultimate fact of life to which everyone is subject.  It is accepted so casually now it might as well be a fact of the universe, like genes or the speed of light.  No one doubts it is the wellspring of religion, even though fear of death is not Christian at all.

In Christianity, death is just another liminal experience.  But it is not definitional; it is not a boundary that sets out who we are, like sexual desire has become.  It is more important now that fictional characters be declared homosexual, or transgendered, or bi-sexual, than that they actually be gay or lesbian or bi- or trans-.  When religious conservatives declared Bert and Ernie gay, Frank Rich pointed out they were puppets, they had no genitals:  they couldn't be gay.  But sexual preference is now a boundary, an identifier, a definition of who you are, so comic book characters who never so much as hold hands, are now lesbians or gay because the story line says so.  It is not necessary to engage in sex in order to be defined by sexual desire. It doesn't matter what you do; what matters is what others say about you, how they define you; or how you tell them to define you.

So defining religion as a fear of death is a way for the non-religious to define, and dismiss, the religious.  But death is not a defining characteristic of Christianity at all, any more than a comic book character is now truly homosexual because the dialogue (but never the action!), says so.

There was this rich man, who wore clothing fit for a king and who dined lavishly every day.  This poor man, named Lazarus, languished at his gate, all covered with sores.  He longed to eat what fell from the rich man's table.  Dogs even used to come and lick his sores.  It so happened that the poor man died and was carried away by the heavenly messengers to be with Abraham.  The rich man died too, and was buried.

From Hades, where he was being tortured, he looked up and saw Abraham a long way off and Lazarus with him.  He called out, 'Father Abraham, have pity on me!  Send Lazarus to dip the tip of his finger in water to cool my tongue, for I am in torment in these flames.'

But Abraham said, 'My child, remember that you had good fortune in your lifetime, and Lazarus had it bad.  Now he is being comforted here, and you are in torment.  And besides all this, a great chasm has been set between us and you, so that even those who want to cross over from there to you cannot, and no one can cross over them that side to yours.'

But he said, 'Father, I beg you then, send him to my father's house--after all, I have five brothers--so he can warn them not to wind up in this place of torture.'

But Abraham says, 'They have Moses and the prophets; why don't they listen to them?'

'But they won't do that, father Abraham,' he said.  'However, if someone appears to them from the dead, they'll have a change of heart.'

(Abraham) said to him, 'If they won't listen to Moses and the prophets, they won't be convinced even if someone were to rise from the dead.'

Lazarus is not defined by death, any more than the rich man is.  Even truth and justice and morality are not defined by death, as Abraham points out.  Lazarus and the rich man trade places, but the point is not the justice of a reversal of roles, the final comeuppance that occurs after death, but the answer to Tolstoy's question: how should we then live?  If the universe is just, if the universe is moral, then the lesson is clear.  If the universe is amoral, however, and unjust, if the final end of all things is merely a return to the state of primordial chaos upon which order was once imposed, then this story is about death, and about being afraid of justice after you die.  But without a moral order, there is nothing to be afraid of, no chance of suffering the fate of the rich man.  And with a moral order, there is no justification for the suffering of Lazarus.

Which is the point, isn't it?