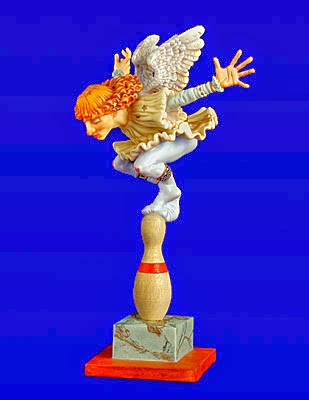 Now see if you can pick up the spare....

Let me see if I can remember this correctly.  I want to be fair to the science; I'm not trying to be critical of physics here.

According to the eminent physicist/mathematician on Science Friday this afternoon, "dark energy" is real, and we know what it is.  What it is, is a number.  It is a number in an equation.  And that number is the cosmological constant first suggested by Einstein (they finally worked out the number itself much later) in 1917.  It is a number, but it is real.  It does not have a particle attached to it (quantum mechanics, if I understand correctly) or a field, because then it would be variable.  It is a constant.  It is real.  And it is a number in an equation.

And they complain that theologians bicker about how many angels can dance on the head of a pin.

Theology, contrary to popular opinion, has never been concerned with describing reality in the way physics (for one) tries to.  Yes, the Roman church tried to silence Galileo, but that was the church hierarchy acting, not the church doctors.  The distinction is important, especially if we remember Gregor Mendel was a monk, and the big bang theory was postulated by a Jesuit priest.  Theology is not concerned with contradicting or being confirmed by science; nor is it limited to "faith seeking understanding," the formulaic phrase I was given in seminary (and which never satisfied me.  It made "faith" into a think akin to James' famously dismissive formulation).  Theology is the attempt to understand the human relationship to the divine, to, in Johannes de Silentio's terms, "the god."  Theology is the study of that relationship, and how humans can understand it, and how humans can understand the nature of God based on the accepted Christian (since it is a Christian field) revelations.

It is no more a complete statement of the nature of God than I can make a complete statement of the nature of my wife (lovely though she is).  Theology is comparable to me trying to understand my relationship to my wife; an act sometimes necessary in any marriage, and sometimes wholly unnecessary (and in a happy marriage, more commonly the latter).  Theology is not a definitive statement on anything; but then the things most important to us are not really amenable to definitive statements.  Do I love my daughter because she carries my genes?  Do I love my wife because she was able to help me pass my genes on to another generation?  And before my daughter; did I love in anticipation of the birth?  Now that she is an adult, do I no longer love my wife, the purpose of my love being fulfilled?

Surely my love for my family is better explained than in terms of "selfish genes."  My relationship to my wife matters much more to me than the cosmological constant, or how it can be both a number and real at the same time, or how time can be without beginning or end, yet to say the same for God is a patent absurdity.  Yet if I say it about God, I am speaking of the ineffable in terms of human understanding.  And if I say time is infinite because the evidence of the universe is that there are multiple universes existing one after the other in time (not continuous in space) because, rather like the Hindu myth of creation, they expire and start over, a cycle without beginning or end, am I not still speaking of the ineffable in terms of human understanding?

And yet if you say this condition of the universe is known because the physicists say so, is that any different than saying the nature of God is known because the priests say so?  Am I not as illiterate in physics and math as the medieval peasant was in literacy itself?  Do I not have to accept that it is so, that the cosmological constant is a number and yet real, while it is still just a number in an equation?  If I accept that, am I not merely accepting it on faith, on trust that the physicist is certain it is true and can be trusted, and so I can trust it without ever understanding whatever proof supposedly upholds it?  Or even what it means when I'm told numbers in equations are real?