The Cross and the Lynching Tree 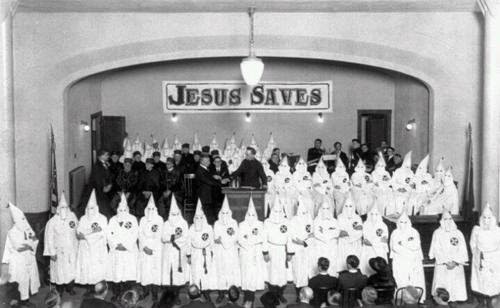 I have to give Borman credit; he understood the importance of the church in society:


When we National Socialists speak of a belief in God, we do not mean the same thing as naive Christians and their clerical exploiters have in mind -- some anthropoid creature sitting around somewhere in the spheres.  Instead, our intent is to open people's eyes to the fact that, aside from this small planet earth, which is relatively insignificant with relation to the vast universe, there is an unimaginably great number of other celestial bodies in the universe, an infinite number of bodies surrounded as is the sun by planets and, like these planets, in turn, similarly surrounded by smaller bodies, moons.  The power of nature's law that propels these infinite bodies through the universe is what we call the omnipotent force, or God.  The claim that this universal force could somehow care for the fate of each individual, of each bacillus here on earth, that it might be influenced by so-called prayers or other astounding things, rests to a great degree on the naivete or on profit-minded impertinence.

We National Socialists, on the other hand, demand of ourselves that we live as naturally as possible -- that is to say, in accord with the natural laws of life.  The more precisely we understand and observe the laws of nature and of life and the more closely we adhere to them, the more we correspond to the will of that omnipotent force.  The more we understand that will, the greater our successes shall be.

The logical conclusion that flows from this basic incompatibility between National Socialist and Christian views is that we must reject any increase in existing support for and any sponsorship of emerging Christian denominations.  For this reason, we have definitively abandoned the idea of establishing an Evangelical Lutheran Reich Church formed from a conglomeration of the various denominations of the Evangelical Lutheran Church because the Protestant Church is as hostile to us as the Catholic Church.  Offering any form of support to the Protestant Church would ultimately work against us. [...]

God is supposed to be roughly a person without a body, essentially omnipotent, omniscient, perfectly free, perfectly good, creator and sustainer of any universe there may be, a source of moral obligation, eternal and necessary.


That goes a bit further than Borman, but Borman means to be dismissive, so he limits himself to an "antrophoid creature."  Still, his point is to effect a reductio ad absurdum, and so dispense with Christianity altogether.

That's a fairly common trope these days, in certain circles.  So let's start there:

I would definitely call O'Hara unreasonable.  I would say, if this is religious belief, then it's all superstition.  But I would ridicules it:  not by saying it is based on insufficient evidence.  I would say:  here is a man who is cheating himself.  You can say:  this man is ridiculous because he believes, and bases it on weak reasons.  (Wittgenstein)


Borman clearly wants to ridicule religious belief, and to do so, he constructs a version of God he can easily dismiss.  To which (because I must be brief here), Wittgenstein would say:  "the way you use the word 'God' does not show whom you mean---but rather what you mean."  In brief, Borman's description of God is invalid to the believer, and if that is invalid, his entire argument is invalid.  To clarify (or perhaps just further muddy) the argument, consider:

Suppose I say that the body will rot, and another says "No. Particles will rejoin in a thousand years, and there will be a Resurrection of you." If some said: "Wittgenstein, do you believe in this?" I'd say: "No." "Do you contradict the man?" I'd say: "No."
...
Suppose someone were a believer and said: "I believe in a Last Judgment," and I said: "Well, I'm not so sure. Possibly." You would say that there is an enormous gulf between us.  If he said "There is a German aeroplane overhead," and I said "Possibly I'm not so sure," you'd say we were fairly near.  It isn't a question of my being anywhere near him, but on an entirely different plane, which you could express by saying: "You mean something altogether different, Wittgenstein."
...
Whether something is a blunder or not--it is a blunder in a particular system. Just as something is a blunder in a particular game and not in another.

And what makes (I hope) quick sense of this is another observation by Wittgenstein:

In religion every level of discourse must have its appropriate form of expression which has no sense at a lower level.  This doctrine, which means something at a higher level, is null and void for someone who is still at the lower level; he can only understand it wrongly and so these words are not valid for such a person.

The very concept of God, in other words, is unavailable to a non-believer.  If you do not accept the presence (or existence, if you prefer) of God, no argument will persuade you because you've already decided the matter.  If you do accept the presence of God, no argument is necessary.  You can claim neutrality (not the position of Borman, you must note) on the matter, but still no argument will move you in either direction without accepting the premise that either God is real, or God is not real (let's leave the complexity of "existence" out of the discussion for the moment).  If you are stuck on the question of God's 'reality,' the concept of God is never even in the offering.  This is why Borman starts where he does.

Borman, in the first quote from Wittgenstein in that group above, would say that he can contradict the believer in the resurrection, even as just a rejoining of particles.  Wittgenstein, however, is right, because the believer and Borman or Wittgenstein are using words in a particular language game, and using those words in different ways. This is perfectly permissible:  physicists say that quarks have "charm," but they don't mean "charm" in the same way we say a person has charm.  That's a simple example, but let it suffice.  We don't all mean the same thing when we use the same words, and those uses are sometimes perfectly permissible, even necessary.  Just as in physics (for example) there are levels of discourse at which a number in an equation can also be "real", just so at certain levels of religious discourse there are concepts that are understood, although they aren't at a lower level.  So while some Christians may still regard God as an anthropoid figure, that doesn't mean one has to regard God as a superhuman figure in order to be a religious believer.  So we can safely dismiss Borman's  first argument; it is not dispositive of the issue of belief, merely descriptive of his own position.  And the only value of it is that it leads him to his next argument.

The next argument is basically the argument of Social Darwinism:  that the strong deserve to survive, the weak deserve to die.  It's not too far removed from the basic American attitude today, as Matt Taibbi has noted, although for "strong" substitute "rich," and for "weak" substitute "poor."  This doesn't make us Nazis; but if we are too close for comfort, don't blame the analysis.

So we can easily discard Borman's second argument, and see from its derivation the wisdom of considering that, if you eliminate religion from society (and using religion as a basis to attack others is as much an elimination of religion as wedding atheism to government power to exterminate religion), you end up with a society based on principles no one really wants to live under.

I'm fascinated by the final paragraph because it speaks so much to the power of the church, even if that power is merely moral power ("How many divisions does the Pope have?").  Not only must God be dismissed as a basis for discussion (the first paragraph), and in order to clear the way for the rule of those with power over those without (or from whom power is taken or withheld), but it is necessary to eliminate the church from society so this rule can be absolute and final in all matters.

I hesitate to draw a parallel to arguments that churches in America should be taxed in order to control them, or should be more sharply restricted from participating in public policy than they already are; but the sentiments are not far removed from those of Borman.  Again, similarity does not indicate solidarity; a valid argument for keeping church and state separate is not a sign of creeping Nazism.  However, the question of why church and state should be kept separate should focus on maintaining the validity of the church and the state.  Dietrich Bonhoeffer, after all, a Lutheran priest himself, opposed the acquiescence of the church to the Nazis, precisely because the Lutheran church was (and still is) the state church in Germany, supported (as it still is) by state taxes.  That the church cannot be granted its validity in society is an argument for power, not for society.  Borman's sentiments are clear:  the interests of society are the interests of the Nazis, and the interests of the Nazis are not served by the continued existence of the Church, Protestant or Roman Catholic.

If you want to consider the true importance of the Church in society, and of religion ("Religion is a search for meaning when you don't have it in this world."--James Cone), take the time to listen to James Cone talk to Bill Moyers, and get the view directly contrary to Borman, and the reason Borman would eliminate religion from society in order to fully control society.

It is because religion allows the other to be fully other; and Borman's vision of society cannot allow that.
Posted by Rmj at 1:41 PM