It's never about that; unless it is 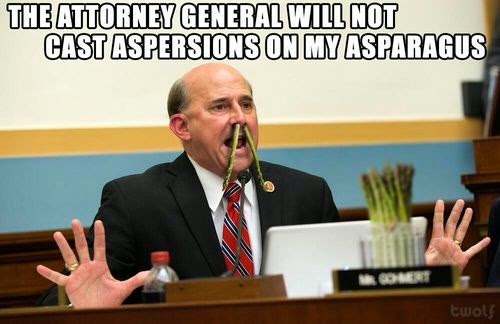 "I didn't say there was a racial component. I was very careful not to say that," Holder told The Huffington Post on Friday, when asked about his comments before the Rev. Al Sharpton’s National Action Network.

In his speech last Wednesday, Holder said that he and President Barack Obama have faced "unwarranted, ugly and divisive adversity."

Although much of the media coverage of Holder's comments  interpreted them as a reference to racial divisions, he told HuffPost that he was referring to a lack of civility in Washington.

"I think what we have seen is kind of a breakdown in civility in Washington, D.C., and that becomes important because I think it has substantive impact," Holder said. "We are celebrating the 50th anniversary passage of the 1964 Civil Rights Act. If we had a Congress or an executive branch-legislative branch relationship in the way that we now have one, where there's this lack of civility, I wonder whether or not you could have forged the necessary compromises, things that involved personal relationships, in order to get such a landmark piece of legislation passed.

"And that's essentially what I was decrying, the fact that we can't somehow separate whatever our personal feelings are and focus on our functions as members of the executive branch or as legislators. I think that I've done a pretty good job in doing that, but it's frustrating at times," Holder said.


That's actually funny.  Who said this contretemps was about race?  And why?  Because, as we know, it's never about race, unless some black person makes it about race; which is why this happened:

A police officer from West Hartford had pulled up across the street, exited his vehicle, and begun walking in my direction. I noted the strangeness of his being in Hartford—an entirely separate town with its own police force—so I thought he needed help. He approached me with purpose, and then, without any introduction or explanation he asked, “So, you trying to make a few extra bucks, shoveling people’s driveways around here?”


The speaker is Doug Glanville, a former MLB player; and an African American male.  I'm sure the confusion was his fault; I mean, who in that neighborhood shovels their own driveway, amirite?

Also this happened; or almost happened:

“We were actually strategizing to put all the women up at the front,” Mack said in a Fox News clip pulled by The Blaze. “If they are going to start shooting, it’s going to be women that are going to be televised all across the world getting shot by these rogue federal officers.”

So the people who came to the aid of Cliven Bundy were not only idiots, but cowards.

Best I can find, despite vague statement in supporting articles that Bundy has a legitimate claim, is that Bundy thinks he does't have to pay the BLM because the federal government isn't legitimate.  His right, NPR tells me, is based on an "ancestral right."  (In fact, NPR so far is the best source for information on this.)  He told FoxNews:

VAN SUSTEREN: There's a court order that says that the federal government can do this. So what's your response to that.

CLIVEN BUNDY: My response is it's the wrong court. I've never had my due process in a Nevada state court, a court of competent jurisdiction.

AMMON BUNDY: Hey, uh - I like my Dad's little story he uses to explain the situation. If someone came in and busted into my house and abused my children, and I call the cops, they don't respond. And then I take them to court, I show up in the courtroom, look on the stand, and it's the very person that abused my children looking down at me in a black robe. How in the world are we going to get justice in that court?


Did you get that? Mr. Bundy has decided what a court of competent jurisdiction is, because he's an American citizen, and Constitution!!!! Or something.

And justice, of course, means the court tells me what I want to hear.  Every lawyer has had clients like that; doesn't mean the clients didn't get justice.

Heroes?  Not hardly.  But at least that story isn't about race.

Right?  I mean, the fact that these are all white people who feel entitled to do as they please has nothing to do with race, does it?

Because it's never about race; unless black people make it about race, that is.