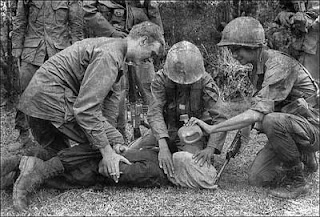 Charles Pierce on the Senate report on U.S. torture:


For years, our herd immunity on these matters consisted of a general consensus that there were some things that the United States simply could not do and remain the country we told ourselves and the world that we were. We believed that there were things that were unthinkable, and that kept us at least partly safe from an outbreak of our worst impulses. That herd immunity will not be rebuilt easily. It will take a steady intellectual and political inoculation against the worst in us all. And we must contain the spread of the infection as best we can, and not listen to those people who tell us that what always has worked in the past for us endangers us now.

I am of two minds about this.  On the one hand:  yes, we Americans have lost our innocence; again.  And yes, torture is a terrible thing, and yes, we are supposed to be much, much better than that.  There are supposed to be lines we will not cross, things we will not do.  We don't set fire to villages by hand.  Far better we do it by plane.  Napalm is good; a cigarette lighter is bad.  That whole line of argument brings out my inner Niebuhr and I want to start talking about the irony of American history again.

But the simpler response is:  the Trail of Tears.  Wounded Knee.  Smallpox infected blankets.  Tuskegee.  Slavery.

We don't have enough examples of things we thought were unthinkable, so we just did them and didn't think about them?  Is Dick Cheney really Patient Zero in this outbreak of contagion?  Or is he just the Joker to our Batman; the id we unleashed when we set about making the world safe for democracy over 200 years ago?